The S&P 500 (Index: SPX) continued to mostly move sideways during the third week of October 2020. Overall, it closed the trading week some 18.42 points (0.5%) lower than in the previous week, which is to say most of what happened during the week was day-to-day noise.

If investors are primarily focusing on 2020-Q4 in setting stock prices, we can expect more of the same next week. That assessment is based on coming toward the end of the redzone forecast range in this week's alternative futures chart. 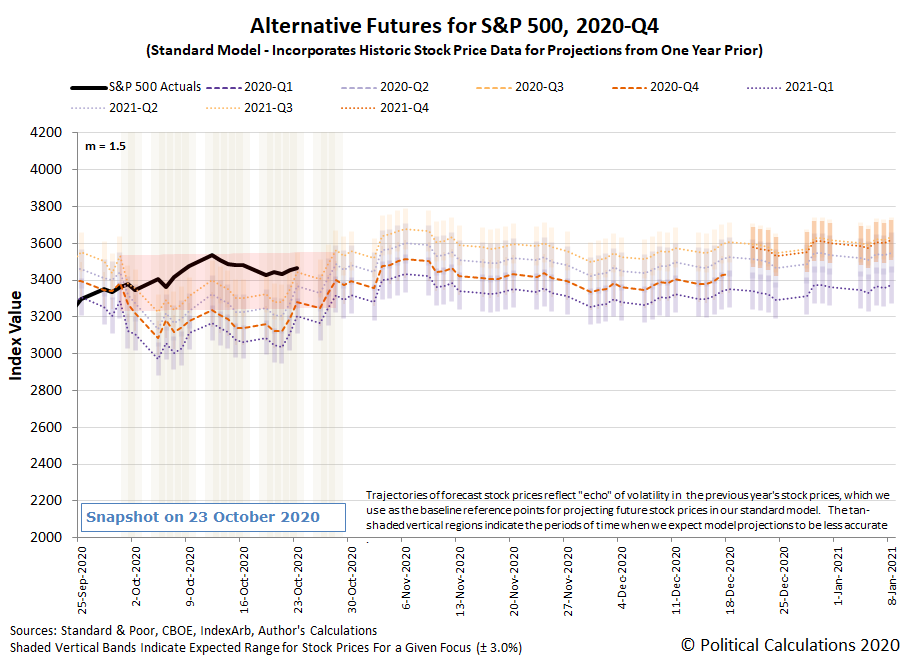 The mostly-noise driven action during the past week continues to be mostly influenced by the changing prospects of the U.S. government's next major stimulus bill. Perhaps a more serious fundamental issue is developing in Europe with its surge in coronavirus cases and corresponding lapse back into lockdown mode in several countries, which adds its own element of noise to the U.S. market. Here's a chart showing the rolling 7-day moving average trends in newly confirmed cases per 100,000 residents in both the European Union and the United States, where we find that Europe's rate of new cases is more than double than in the U.S. 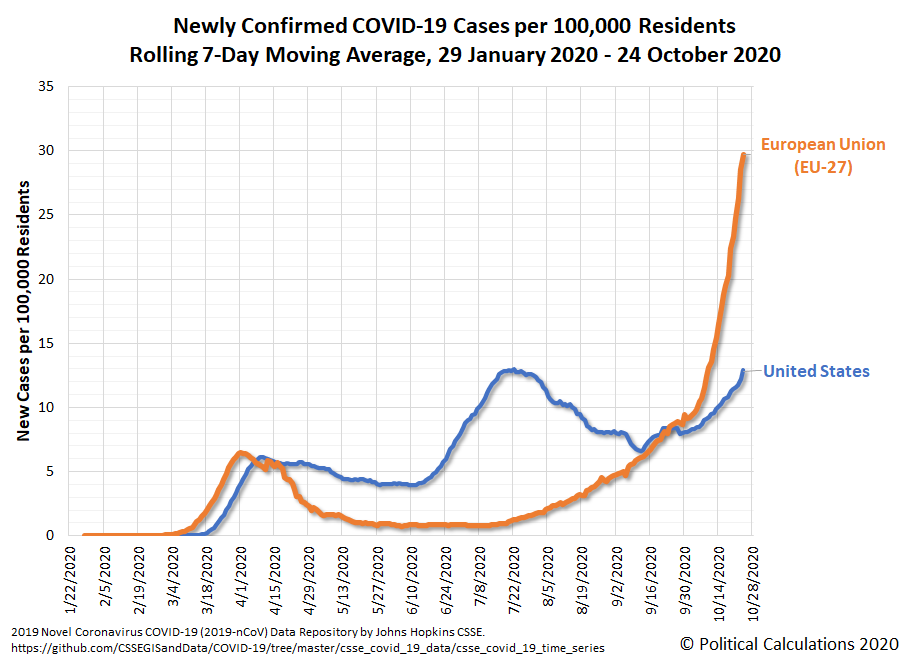 Here's a second chart showing the rolling 7-day moving average trends in newly reported deaths per 100,000 residents in the E.U. and U.S., where we see the E.U.'s COVID-19 death rate has likewise surpassed the United States. 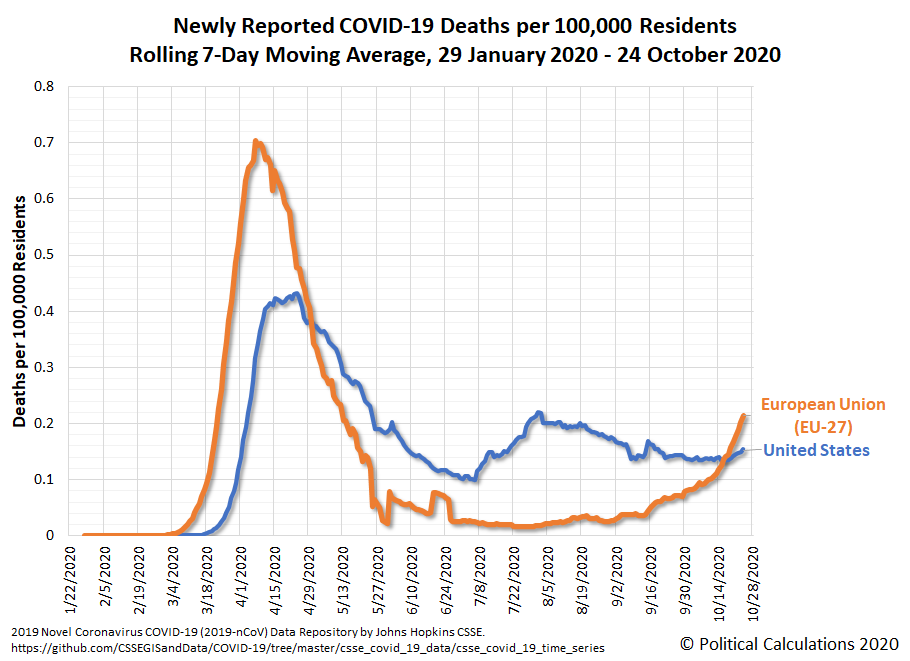 While the U.S. is doing far better than the E.U., we expect the increasing number and relative severity of lockdowns being imposed in various EU countries will negatively affect commodity markets and prices, which will put a damper on the business outlook for U.S. firms.

Overall, the general tone of the news during the past week was mixed, with several stories referencing the U.S. economy's stronger than expected performance in recent weeks, which perhaps helps explain why stock prices mostly moved noisily sideways rather than decidedly downward.

The Big Picture's Barry Ritholtz has outlined the positives and negatives he found in the past week's economics and markets news.

Update 28 October 2020: The S&P 500 dropped 3.5% today, with the die cast long before the market opened thanks to France's and Germany's decision to impose new nationwide COVID lockdowns, which will negatively impact the European and global economy. From our perspective, that news appears to have triggered investors to suddenly shift their forward-looking focus from 2020-Q4 toward 2021-Q1 in a new Lévy flight. The change comes just as we're reaching the end of the redzone forecast range: 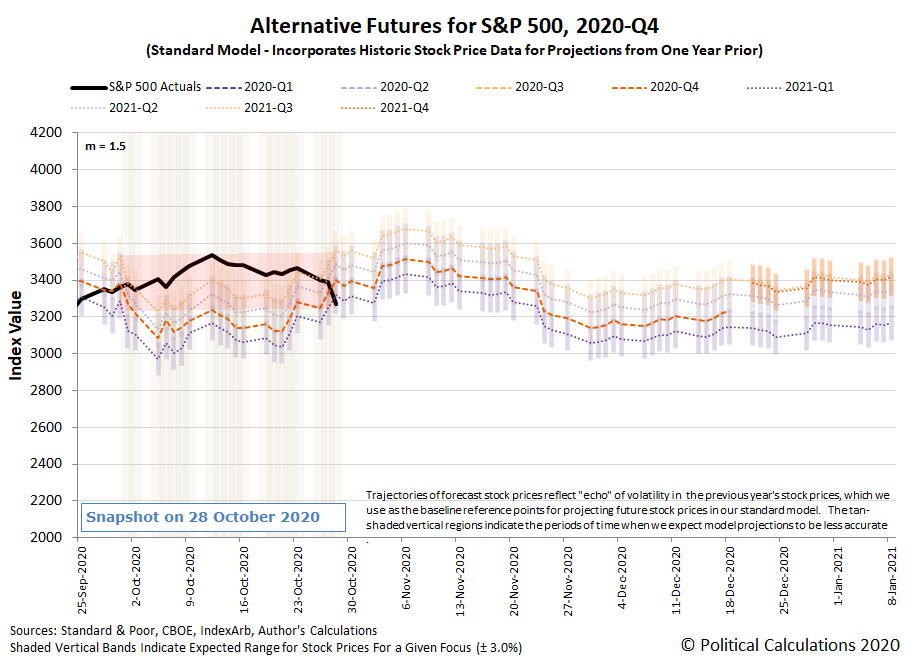 This new shift is consistent with our nearly one month old observation that investors "may switch their focus back and forth between 2020-Q4 and 2021-Q1 severval times before the end of the 2020 calendar year". It's important to note that while we can anticipate the effect and the relative magnitude of the shifts when they do occur, they are not predictable because the timing of these shifts is essentially random. That is because they are prompted by the random onset of new market-moving information, like today's before-the-bell news of the Eurozone's new coronavirus lockdowns. At the same time, what makes the content of the news that drives these events so important is how it affects the time horizon for investors, or rather, how far forward in time they are looking when making their current day investing decisions.

What events might refocus investors back upon 2020-Q4? That answer may come sooner than you might think, but once again, it all hinges on the random onset of new information.