The first week of January 2021 had a lot of action for the S&P 500 (Index: SPX), with political developments in Washington D.C. playing an unexpected role in boosting the index to a new record high on Friday, 8 January 2021.

For investors, the first big event came after the market closed on Tuesday, 5 January 2020, with the outcome of two U.S. Senate runoff elections in Georgia, which the Democratic party's candidates won. The victories mean partisan control of the U.S. Senate will be held by the Democrats, who will functionally hold the majority through the incoming Vice President's tie-breaking vote in the Senate after the new administration assumes office on 19 January 2021.

Combined with its narrow majority in the U.S. House of Representatives, the Democrats now control both the U.S. Congress and the White House, which means the party will be able to impose its preferred policies. For investors, that means higher taxes will likely be passed in the near term, which had prompted stock prices to drift lower as investors were increasingly focusing on the first quarter of 2021 in setting current day stock prices.

S&P 500 investors reacted in two ways to these events. First, the expected announcement of the economic package prompted investors to shift their forward-looking investment horizon toward the second quarter of 2021 during the week, which began boosting stock prices during the week. Second, the announcement of the trillions of new spending prompted them to boost their expectations for the S&P 500's dividends throughout 2021, anticipating a large portion of the proposed new government spending will eventually end up in their pockets.

We have two charts that capture the effect of these two market-moving events. The first chart presents our first look at the dividend futures-based model's projections of the future for the S&P 500 during 2021-Q1. 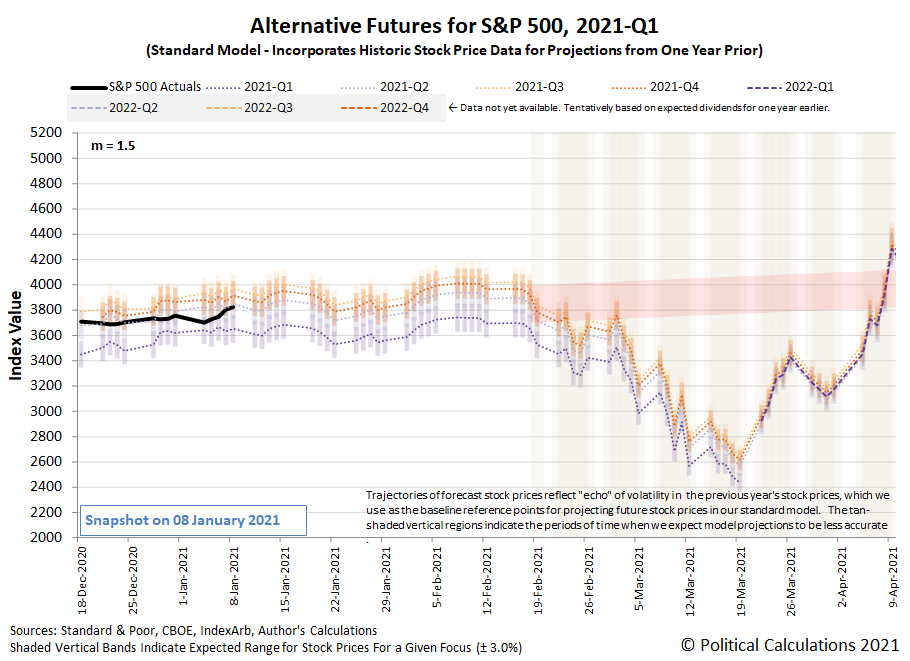 This chart also shows the huge echo of the stock market's volatility during the period when the coronavirus pandemic reached the United States a year ago. This echo effect is an artifact of the dividend futures-based model's incorporation of historic stock prices as the base reference points from which it makes its projections of the future potential trajectories the S&P 500 may take depending upon how far forward into the future investors are focusing. We've tentatively added a redzone forecast period beginning on 19 February 2021 to compensate for the effect of the echo of past volatility on the model's projections, which we'll revisit and refine as we get closer to that anniversary.

The second chart is an animation showing how the expectations for future quarterly S&P 500 dividends per share changed from Thursday, 7 January 2021 to Friday, 8 January 2021 as a result of the stimulus announcement.

Spread over the four quarters of 2021, the value of the S&P 500's expected dividends per share rose by $1.18 from Thursday to Friday last week. If you know how the S&P 500's index math works, and happen to know the index' divisor, you know that's a big deal, even with higher taxes in the offing.

Other stuff happened during the week, but these were the main market-moving news events. Here is our summary of the week's more market-relevant headlines.

Need more news to kick off the new year? Barry Ritholtz listed the positives and negatives he found in the markets and economics news during the first week of 2021 over at The Big Picture.