The IIE team looks forward to Halloween each year, simply because most inventions associated with it are completely frivolous. Most have no purpose beyond providing a moment of entertainment or scary whimsy, only to be either discarded or boxed away until the next Halloween.

The invention described in U.S. Patent 5,491,007 falls somewhere in between the discardable and the storable. It also solves the problem of consumers having to buy real pumpkins each Halloween, but we'll let its inventor, Jeffrey Chapman, explain more in the background for the invention:

The invention is in the field of novelty items and their manufacture, particularly items such as artificial pumpkins that the consumer desires to carve or alter after purchase.

Known artificial novelty articles such as Halloween jack-o-lanterns are typically manufactured from paper products, ceramics, or thin, soft plastic and, while useful for display, are not suitable for carving by the purchaser or safe for use with lights. To honor the holiday tradition of carving pumpkins, therefore, members of the public have before now been forced to purchase real pumpkins. However, real pumpkins are perishable and therefore will rot after a time. They are messy and smelly to carve. They cannot be reused in subsequent years. There is a need, therefore, for novel application of known materials to articles that can be carved, such as artificial pumpkins that are durable, non-flammable, and carvable.

Chapman's novel solution to these problems involves manufacturing hollow pumpkin-like structures using polyurethane foam that is sprayed onto a harder, thin polyurethane shell in the shape of a pumpkin. The resulting product then provides a carvable structure that, just as claimed, doesn't involve any of the messy, smelly innards of real pumpkins. Figure 1 from the patent illustrates an example of the invention, post-consumer carving: 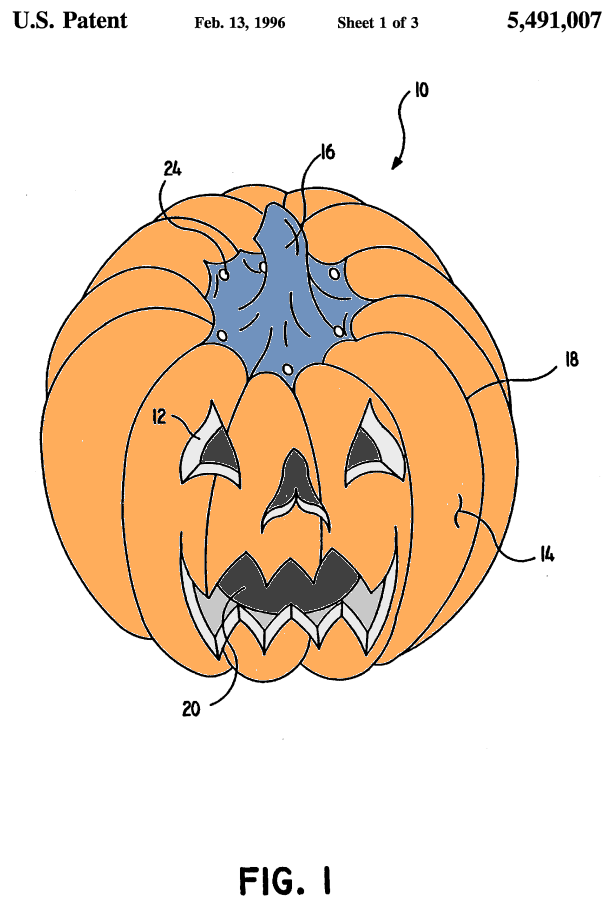 Believe it or not, you can actually buy a product that appears to have been inspired by this patented 1996 invention! Amazon sells a 6-inch Carvable Polyfoam Pumpkin, which at this writing sells for $9.88.

Inventions in Everything has another invention we'll feature closer to Halloween this year, which we're really looking forward to sharing because it's pure nightmare fuel. You've been warned!

The IIE team has previously covered the following related inventions: