It didn't take long for the S&P 500 (Index: SPX) to have a trading day qualify as "really interesting" by our standards, as Friday, 29 April 2022 delivered.

But what did it deliver after having already fallen off the proverbial edge? Simply put, investors have much more fully shifted their forward looking focus to 2022-Q2, thanks to increasing prospects the Fed will hike rates by three quarters of a point in June 2022. Here's how that growing realization looks on the dividend futures-based model alternative futures chart: 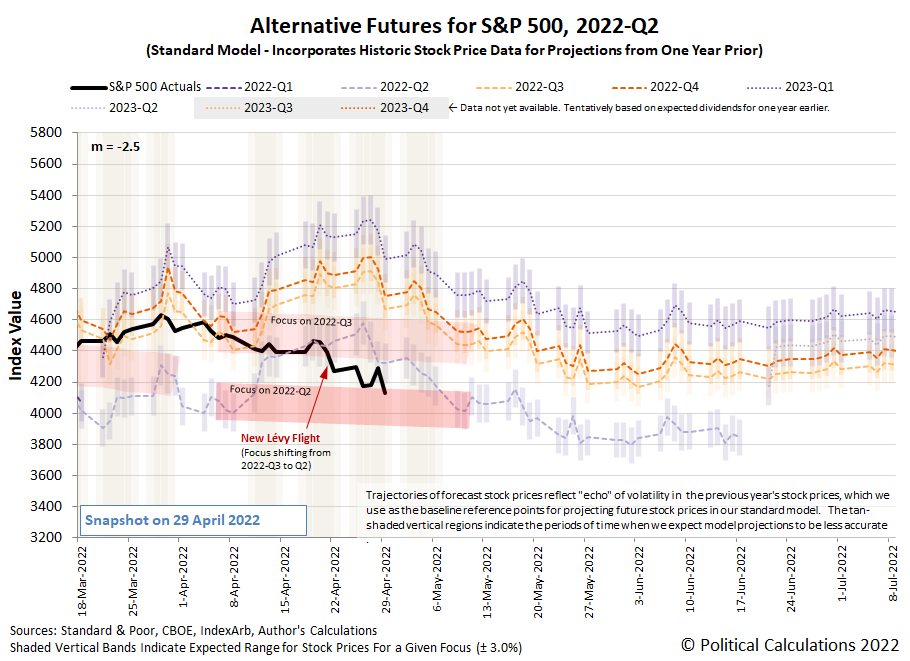 There's still room for the S&P 500 to fall lower, but without any erosion as yet in the expectations for future dividends, there's less immediate downside now than there was a week ago. The following market-moving headlines recap the random onset of new information that influenced the S&P 500's direction during the exciting and volatile week that was....

The CME Group's FedWatch Tool projects the Fed will hike rates by a half point in May and June (2022-Q2) and again in July and September (2022-Q3). After that, the FedWatch tool anticipates quarter point rate hikes at six-week intervals through March 2023.

The BEA reported real GDP in 2022-Q1 fell by 1.4%, which was quite different from the Atlanta Fed's GDPNow tool's final forecast for a real gain of 1.3%. As expected, the GDPNow tool has shifted its focus toward 2022-Q2, where it anticipates a positive 1.9% real growth rate with respect to the level of 2022-Q1's real GDP level.

The day-over-day change in the S&P 500 definitely qualified as interesting today, after Fed Chair Jerome Powell took a 3/4% rate hike "off the table" for 2022-Q2 and possibly for 2022-Q3 as well. Investors immediately refocused their forward looking attention back toward 2022-Q3 in response. Here's how that change looks on the alternative futures chart whose purpose is to track these dynamics: 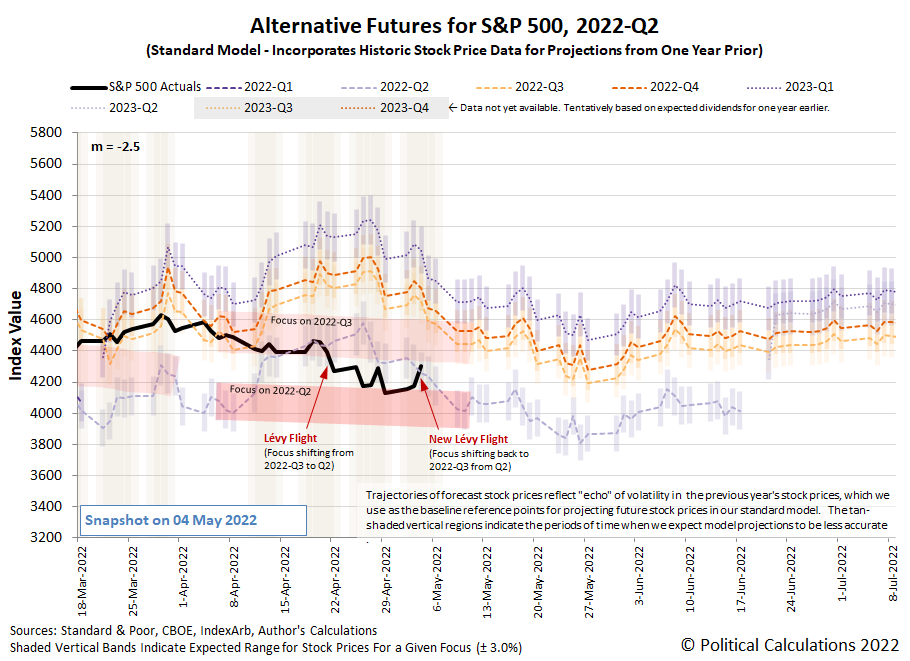 The Fed triggered the fourth Lévy flight of 2022 with investors shifting their future-oriented focus back toward 2022-Q3. With the Fed's expectation-setting actions now behind us and Q2 earnings season half over, we think it would take an exceptional development for investors to re-shift their focus back to the current quarter of 2022-Q2. Since such a shift would be accompanied by a large downward movement in the S&P 500, that now much lower probability represents a positive development in our book as we should now be on the opposite side of the volatility cluster.

So if such an apparently unlikely event happens, it won't be by accident. What could trigger such a reaction?

That last question was, in fact, a trick question. The thing that could trigger such a reaction is a sudden shift in the time horizon for investors, which on 5 May 2022, shifted strongly back toward 2022-Q2 from 2022-Q3. The reason: investors absorbed the new information of other nation's central banks implementing surprise rate hikes and called Jerome Powell's bluff that the Fed won't hike rates higher and faster to deal with the U.S.' higher relative rate of inflation. They've made new bets the Fed will be forced into a larger-than-half-point rate hike before the end of 2022-Q2. Here's what that looks like on the alternative futures chart: 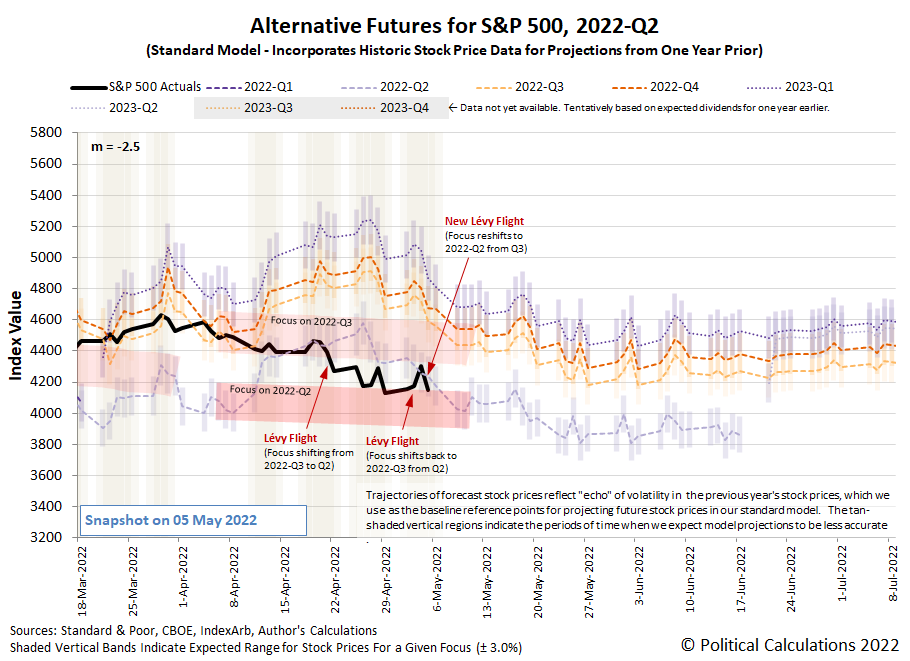 Every time the forward-looking attention of investors strongly shifts from one point of time in the future to another, it qualifies as a new Lévy flight event by our definition. We're now up to five such events in 2022 and the only thing we'll guarantee at this point is that 2022 will experience at least one more Lévy flight event, which will happen sometime before the third Friday of June 2022. (When you read the previous sentence, put the emphasis on "at least one more"....)

This will be our last update to this post. We'll catch whatever happens on Friday, 6 May 2022 up with our next regular S&P 500 chaos series entry early on Monday, 9 May 2022. If you've been regularly following the series over the last several weeks, you're fully up-to-speed with the factors behind the U.S. stock market's recent volatility cluster.