Which is to say that it has only taken 14 trading days from when the August 2022 inflation report was released for the S&P 500 to rack up the equivalent of 43% of its total loss to date during 2022. 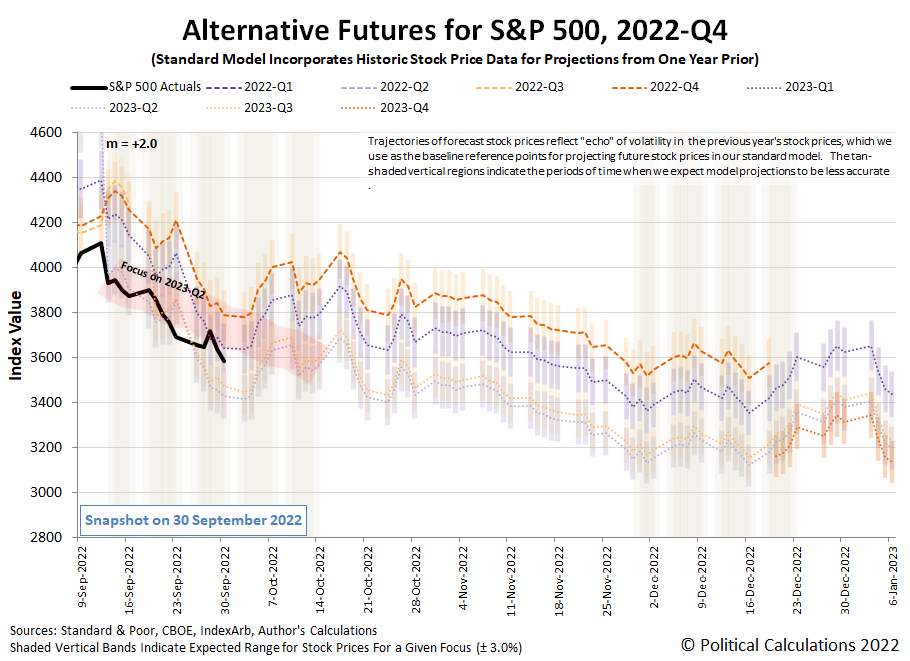 In the previous edition of the S&P 500 chaos series, we were concerned the actual trajectory of the index was following the projected trajectory for investors focusing on 2023-Q2 too closely. That's because we're also in a period where the dividend futures-based model's projections of the potential futures for the index are being impacted by the echoes of the past volatility of stock prices. Since the model uses historic stock prices as the base reference points for its projections of the future, that echo effect means the model should be less accurate at this time.

The redzone forecast range represents what we would call the signal, it's where we would expect the index to be under ordinary conditions for investors. The gap between the actual trajectory and the redzone forecast range is what we would call noise. This difference represents the effects of speculation caused in part by the higher level of volatility unleashed in the new market regime.

We think investors are setting stock prices more negatively in the new market regime because of their developing expectations for how high the Federal Reserve will ultimately set interest rates. They are expected to peak in 2023-Q2, which is why that distant future quarter has become the primary focus for investors.

That's supported by the context provided by the market-moving headlines of the week that was. Here are the headlines we followed during the final trading week of September 2022.

The Atlanta Fed's GDPNow tool's projection for real GDP growth in the just-ended calendar quarter of 2022-Q3 rocketed up from +0.3% to +2.4% based on new data pointing to higher consumer spending and more private investment. The Bureau of Economic Analysis will provide its first official estimate of real GDP growth in 2022-Q3 at the end of October 2022.