The Earth's economy cooled in October, reversing what had been a strong rebound in the third quarter of 2022.

That's the assessment from how the pace at which carbon dioxide is being added to the Earth's atmosphere changed during the first month of the fourth quarter of 2022. That change comes as signs that the United States' economy, the Eurozone's economy, and China's economy are all showing cracks after they rebounded during the preceding quarter. The latest update to Political Calculations' chart illustrating the rate at which CO₂ is accumulating in the Earth's air shows the results of the rebounds taking place in the world's two largest economies. 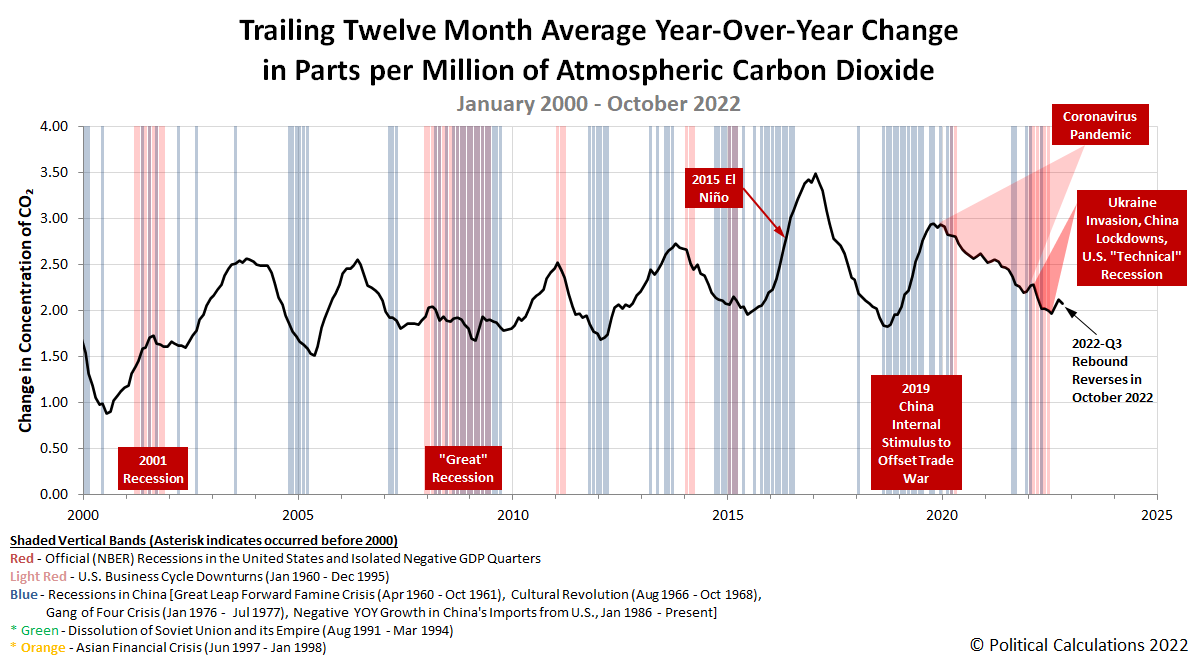 Because China is the world's largest emitter of CO₂ by a very wide margin, what's happening with its economy plays an outsize role in how much carbon dioxide is added to the Earth's air. During October 2022, China's government ramped up its ongoing COVID-zero lockdowns, seriously disrupting the nation's economy. That negative impact is confirmed by China's imports of foreign-produced goods, which fell during October 2022.

At the same time, China's exports crashed in October 2022, particularly to both the United States and to the Eurozone, which indicates the relative economic health of both regions declined during the month. Here, central bank rate hikes aimed at arresting high inflation are having a negative effect on economic growth in each of these regions. The U.S. and E.U. are respectively the second and third largest emitters of carbon dioxide to the Earth's atmosphere.

In our last edition, we asked how long might 2022-Q3's uptrend last? Although we were already seeing signs that rate hikes in the U.S. and the Chinese government's economically destructive zero-COVID lockdowns had the potential to reverse the summer's rebound, we wouldn't have guessed that it was already over as each of these regions are now dealing with strengthening recessionary forces.

The effects of which can coincidentally be confirmed by measuring the rate at which the concentration of an invisible gas in the Earth's atmosphere changes at a remote observatory on the side of a volcano in the middle of the Pacific Ocean.