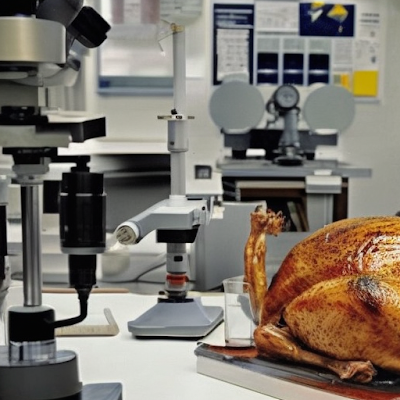 We haven't yet seen the iteration of the CSI: Crime Scene Investigation television franchise that rips this story from the headlines, but in 2007, turkey DNA was instrumental in proving the guilt of a criminal.

We had high hopes when we first saw the headline Utah State University Helps Solve Iowa Turkey Crime. Could it be that the crime being investigated involved a frozen turkey leg used as a murder weapon that was subsequently cooked in an effort to destroy evidence by serving it to the police who were investigating it? But no, it was nothing so dramatic. The crime in question involved poaching, where the murder victims were themselves wild turkeys.

Here's the key to how the Utah State University researchers cracked the case:

He beat a similar rap once before because no one could prove the meat came from wild turkeys instead the grocery store. This time authorities shipped meat samples to Utah State where they have the only nationwide wild turkey DNA database.

Who knew we needed one? But in this case it was invaluable. Samples from Justin Jones' private stash of turkey meat matched the DNA of wild turkey. "It was pretty convincing that they were, in fact, poached, that they were not domestic turkeys," genetics lab manager Carol Rowe said.

There was more to it than just comparing DNA matches to samples in USU's database. Here's how the Utah State researchers described how they got their man.

Roberg contacted Mock, who agreed to help with the investigation – but she needed help. Mock required DNA samples from known wild turkeys in the same geographic region as the suspected poached birds.

“If you’re showing a particular bird came from a particular population, you have to figure out the probability that this genotype came from your target population rather than from some other population,” says Mock, assistant professor in USU’s Department of Wildland Resources.

With help from Iowa conservation officers and state DNR personnel 78 samples were collected and shipped to USU’s lab. Mock and her team went to work and discovered that the samples seized from the suspect’s freezer showed a high probability of coming from the Iowa wild turkey population.

In the end, they had the suspect dead to rights, leading to perhaps the most boring legal outcome possible:

In October, Jones entered a guilty plea in court and was ordered to pay fines and court costs plus $1,000 toward the cost of USU’s efforts.

This 15-year old case is surprising in many ways. But perhaps the most surprising is how low the cost of doing DNA analysis had become. Consider the following:

DNA analysis has become even cheaper since. Offenders committing turkey-related crimes should beware!

Image Credit: Stable Diffusion DreamStudio Beta - "A cooked turkey in a laboratory, beside a microscope, scientists".