Friday, 20 January 2023 marked the second anniversary of President Biden's tenure in the White House. On that day, the U.S. government's total public debt outstanding reached $31,454,980,005,742.40. The only reason it isn't higher is because the U.S. Treasury Department hit the nation's statutory debt ceiling the day before.

Large numbers like that can be difficult to grasp, so let's bring them down to a more human scale. If you divided the U.S. government's total public debt outstanding equally among every household in the U.S. two years ago, each would be responsible for paying the U.S. government's creditors $216,111. Two years later, the national debt burden per household has grown to $239,745. The increase per household is $23,634, or 10.9%, which of course, would be on top of whatever other debt each household has.

That increase is the equivalent of buying 131,202,000 American households a brand new 2023 Suburu Impreza! More on that metaphor in a bit....

We've visualized the growth of the U.S. national debt during the Biden era in the following chart. In the chart, we've also identified the U.S. government's creditors by major category: 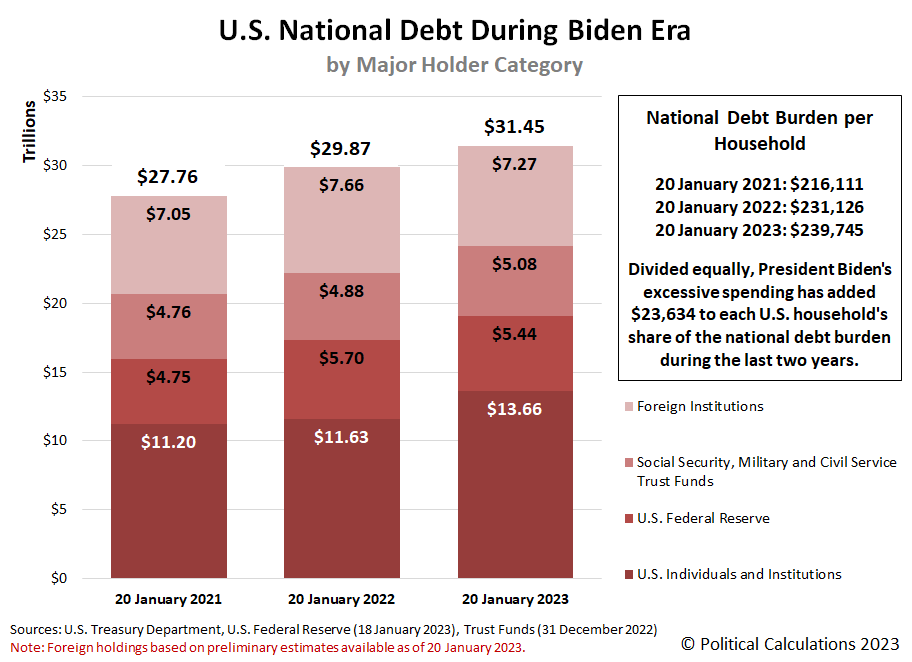 Here's the big question. Would American households be better off if President Biden actually did buy each a brand new Suburu Impreza instead of what he actually bought with all that newly borrowed money?

Or rather, did Americans get anything of real value to show from President Biden's debt-fueled spending and what it has wrought?