We're seeing a remarkable change in investors' expectations for 2023's dividends for the S&P 500 (Index: SPX). The outlook for quarterly dividends has brightened considerably from the outlook we featured just a few weeks ago. Instead of falling year-over-year from the levels recorded in 2022, the CME Group's quarterly dividend index futures are now projecting they'll show positive gains with respect to last year's results for all but the fourth quarter at this writing.

The following chart shows the expectations for the S&P 500's quarterly dividends per share as of Friday, 13 January 2022. 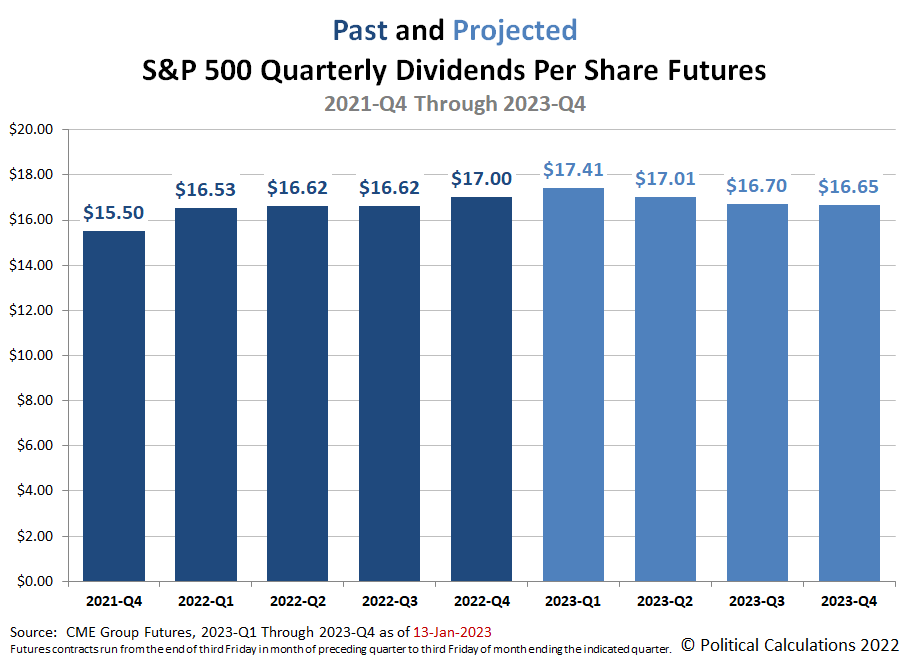 That change in expectations for dividends has boosted the outlook for stock prices through the first quarter of 2023. The dividend futures-based model is now projecting a more positive trajectory for stock prices, as indicated by the slightly upward slope of the redzone forecast range indicated on the latest update for the alternative futures chart. 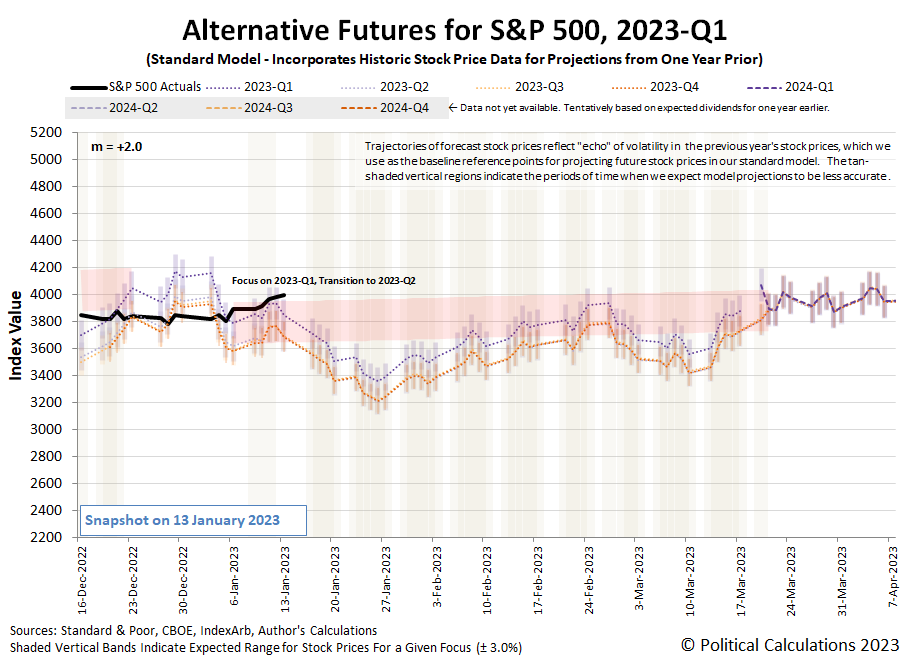 Also during the past week, investors shifted more of their attention toward the current quarter of 2023-Q1. The S&P 500 ended the trading week at 3,999.09, rising to the high side of the redzone forecast range. That change is consistent with how we described stock prices would behave in that scenario in the previous edition of the S&P 500 chaos series.

How long might that last? That remains to be seen, but you can see some of the positive change in sentiment in the week's market-moving headlines, where expectations strengthened that the Fed's nearly year-old series of rate hikes will come to an end in this current quarter.

The CME Group's FedWatch Tool continues to project quarter point rate hikes at both the Fed's upcoming 1 February and 22 March (2023-Q1) meetings, with the latter representing the last for the Fed's series of rate hikes that started in March 2022. The FedWatch tool then anticipates the Fed will maintain the Federal Funds Rate at a target range of 4.75-5.00% through November 2023. After which, developing expectations for a U.S. recession in 2023 have the FedWatch tool projecting a quarter point rate cut in December (2023-Q4). Or rather, no change at all from last week!...

We did see change for the Atlanta Fed's GDPNow tool's latest projection for real GDP growth in the fourth quarter of 2022, which increased to +4.1% from last week's +3.8% estimate. The BEA will issue its first estimate of 2022-Q4's GDP later this month, on 26 January 2023.