Since the level of the U.S. National Debt passed the 8 trillion USD mark in October 2005, I've had a nagging question: how come the share of the national debt that would be shared equally among all American men, women and children only amounts to $26,727?

In one word, that’s it. To be more specific, the reason the U.S. National Debt per Capita isn't higher than it is the result of the combination of economic growth and population growth. Political Calculations has previously looked at the relationship between the U.S.' National Debt and National Income from 1900 into 2005, but looking at the National Debt-to-Income Ratio doesn’t capture the growth of the U.S. population. So, we went back to the drawing board to figure out how to add population to the debt/income mix.

On the Drawing Board

At this point, I should note that the Debt to Income ratio is also equal to the ratio of National Debt per Capita (D/P) to National Income per Capita (GDP/P), where P represents the U.S. Population:

We can rearrange the terms in the expression above to come up with the Debt to Income per Capita Index (DTI/P): 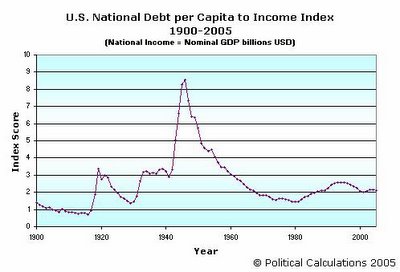 As noted above, we get the numbers in this chart by multiplying the actual number produced by the math by 1 billion, which accounts the “Nominal GDP billions USD” part of the title displayed in the chart above.

So, again, what does this do for us? As it happens, perhaps the most useful application of this index is to allow us to quickly calculate the equivalent National Debt per Capita for any year automatically adjusted in terms of the economy of the year for which we select a GDP figure. We accomplish this by taking a given year's nominal GDP data and multiplying it by the Index value for a year in which we're interested. This allows us to express the relative debt load carried in previous years with the current year and vice versa. 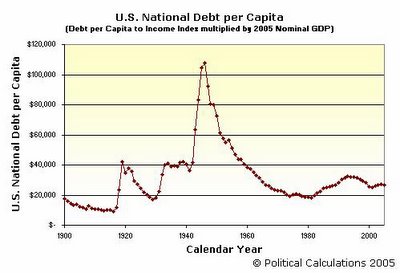 Given how relatively flat the National Debt per Capita has been in the last 5 years, I would almost argue that the amount of debt spending agreed to by the U.S. Congress each year takes something like the National Debt per Capita to Income Index into account. Now that the federal government is pushing the edge of the arbitrarily legislated nominal National Debt Limit, it will be interesting to see if this factor plays a role in setting the amount of the increase of this artificial limit.

The following posts provide additional background and links to the original data sources used in the calculations described above: