The week of Thanksgiving does strange things to us here at Political Calculations, as the thought of enjoying a large feast with family sways us from our usual thoughts of money and business matters. Well, almost, because as we updated our annual look at the growth of turkeys on U.S. dining tables in recent years, we started wondering about how much money there is to be made in turkey farming.

Quite a bit, as it turns out! Our go-to source for all things turkey-related confirms that billions of dollars are made each year in producing turkeys. The following chart shows how many of those billions of U.S. dollars made it to the turkey farmers of America from 1990 through 2005: 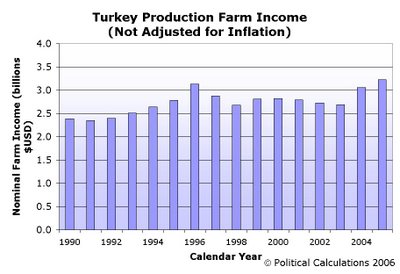 As we can see, in 2005, the number of dollars accumulated in the coffers of America's turkey producers surpassed all previous years for which we have data, reaching $3.23 billion! The previous record was set in 1996 at $3.13 billion – not bad considering that over 47 million more turkeys were produced in that year than in 2005!

But wait, there's more - we haven't taken inflation into account!

Using Oregon State Professor Robert Sahr's conversion factors (available in this 36KB PDF document) for translating the value of dollars of previous years to 2005 U.S. dollars, we find that today's record isn't all it's cracked up to be: 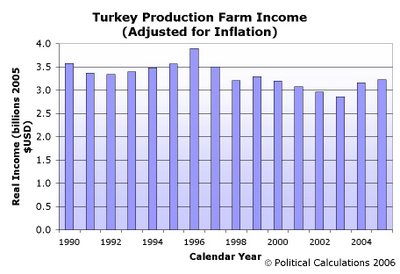 In this chart, it's clear that the 1990s were very good to U.S. turkey farmers, as compared to the years since! We find that 2005's apparent record-setting $3.23 billion of income pales in comparison to 1996's inflation-adjusted $3.90 billion. What's really remarkable, as we saw yesterday, is that the total amount of turkeys produced in 2005, as measured by their Ready-To-Cook (RTC)-Inspected weights, which is what U.S. consumers actually buy, was 58 million pounds greater than the amount produced in 1996.

What this tells us is that turkeys have become much less lucrative per pound to produce than they were in the 1990s. Our next chart shows the trend in farm income per RTC-Inspected pound of turkey using inflation-adjusted 2005 U.S. dollars: 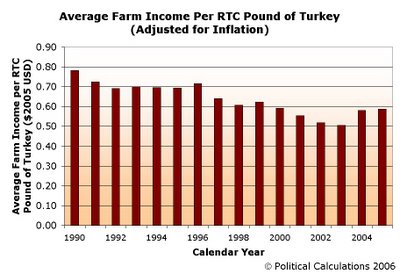 This decline in real income has come even as the productivity of the U.S. turkey farmer has increased consistently throughout the same period.

We suppose we won't be closing up shop to begin farming turkeys anytime soon!