The BEA just released the final revision to the U.S.' Gross Domestic Product and that means it's time again for us to update our GDP growth bullet charts!

The first chart below shows the annualized percentage change in Real (inflation-adjusted) GDP for the just finalized revision for the second quarter of 2007 (3.8%), along with the percentage changes in the two preceding quarters (0.6% for one quarter ago and 2.1% for two quarters ago.)

These changes are presented against a temperature scale that illustrates the historic rates of GDP growth (or at least, since 1980) that correspond with slow growth, shown in purple at the "cold" end of the scale, and faster rates of economic growth, shown in the "temperature" transitions from purple to blue to green to yellow and finally to red at the "hot" end of the scale! 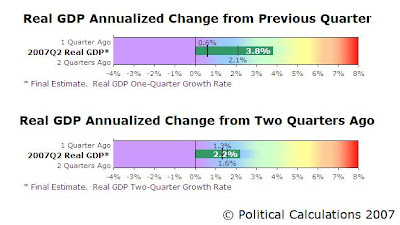 The lower volatility displayed in the rates of growth measured by the two-quarter chart underlies the forecasting ability of our GDP forecasting tool, for which we'll provide an updated forecast next week.