Following the release of the largest study of cancer ever for Europe, we previously compared the U.S. and Europe with regard to five-year cancer survival rates for all types of cancer, but that left open two big questions:

To find out where Canada ranks among the U.S. and the various nations of Europe, we turned to the National Cancer Institute of Canada's recently released report Canadian Cancer Statistics 2007, which provides the five-year cancer survival rates for all types of cancer for all the provinces of Canada but Quebec. We've incorporated this data into the following chart, which now shows where the U.S., Canada and the nations of Europe rank with respect to each other in this measure of health care effectiveness: 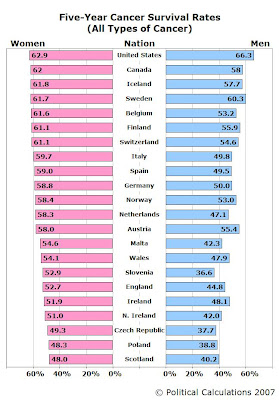 The chart above shows the breakdown of five year cancer survival rates between men and women for patients diagnosed with the condition between 2000 and 2002. The data for the European nations and the U.S. comes from the Eurocare-4 study, and is ranked according to the percentage of women who, after being initially diagnosed with cancer, have survived for at least five years.

The chart reveals that the U.S. ranks at the top when it comes to surviving cancer, but with Canada closely behind, generally ranking ahead of all the nations of Europe. The exception is for Swedish men, who come in second for overall survival rates.

We should also note that the Canadian data is not presented with the same accuracy as the European and U.S. data, which may affect the nation's position in the scale due to errors in rounding the underlying numbers.

We next turned our attention to how the U.S. and Europe compared with respect to different kinds of cancer. For that, we turned to Jody of the PolySciFi Blog, who shelled out good money for the Eurocare-4 report presented in the August 2007 edition of The Lancet Oncology. We've presented the data she originally posted in an easier-to-read dynamic table format, which you may sort by clicking the various column headings:

In the table above, the first value given for the European and U.S. data is the average five-year survival rate and the range given in parentheses provides the 95% confidence interval for the data. The final column reveals which region between the U.S. and Europe provides better outcomes, with a ranking of par indicating that cancer survival rates between the two regions are roughly equivalent for the indicated type of cancer.

We've omitted including Canadian statistics for this portion of analysis given that not all types of cancer survival rates included in the Eurocare-4 study were available in our available data and also due to the lower accuracy to which the numbers that have been reported have been presented.

We find in the table's data that the U.S. generally ranks well ahead of the nations of Europe for surviving nearly all types of cancer.