Political Calculations
Unexpectedly Intriguing!
01 October 2007
Gains and Losses in the US Job Market 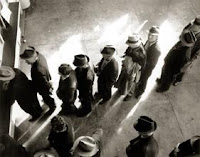 Figuring out how many jobs have been added or loss from the U.S. economy can be a real pain.

When you consider that there are at least three different sources who provide different pictures of how jobs are trending in the U.S., you've got a real problem - which one can you trust to give you the best picture of what's going on?

Jim Hamilton of Econbrowser has considered the problem, and his answer is: all of them! Hamilton argues that taking a weighted average of the employment data from the BLS' household and establishment surveys and payroll processor ADP can provide a much better picture of the state of jobs in the U.S. than any single report by itself.

So, that's what we've done with our latest tool - all you need to do is enter the indicated data in the table below! And, as a bonus feature, we also make it possible for you to change the weighting factors!

The default data in the table above is taken for August 2007. In the calculations, Hamilton combines the government's count of its own monthly change in employment levels with ADP's count of the private sector's payroll, with the 10% weighting factor applied to the result.

Since first posting his weighted average jobs numbers earlier this year, Hamilton's method has done very well in anticipating the revisions to the initial reports, indicating that so far, the weighted average technique has got game!