In last week's edition of On the Moneyed Midways, we featured a post by CFP Art Dinkins on understanding indexed annuities. In the article, Art made the following statement regarding the performance of the U.S. stock market (emphasis his):

If someone has the ability to stomach the ups and downs of the market, and a sufficient timeframe, I believe they are better off in the market. In 2002, when the markets were at a low point, I calculated the 10 year total returns on the last day of each month for the S&P and the DJIA. The S&P study started January 1950, and the Dow study started 1960. In all that time there was never a single ten year period where the indexes went negative.

We thought that claim might make for a neat post, so we went to our average monthly data for the S&P 500 since 1871 and checked. The chart below shows what we found when we took the 10-year rates of return for the S&P 500 and adjusted for inflation (as measured by the Consumer Price Index for Urban Workers): 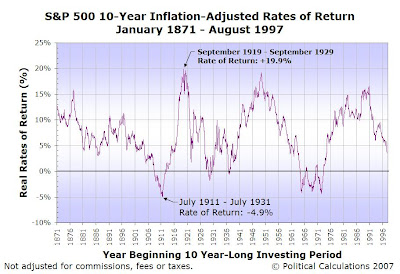 As you can see, we just blew that claim out of the water. Where the S&P 500 is concerned, there's a rather extended period where ten year-long investments placed from June 1964 through March 1973 regularly came out in negative territory. It's possible that Art might have been using nominal rates of return (not adjusted for inflation) in his analysis, but it would seem that we've already busted the ten year holding myth!

Being fans of the Discovery Channel show MythBusters, we decided do as the MythBusters would do and go through our data to find the amount of time an investor anytime since January 1871 would have needed to hold onto their investment in the S&P 500 to guarantee a positive rate of return. Our next chart shows the real rates of return that we found for rolling investment holding periods of 20 years since January 1871: 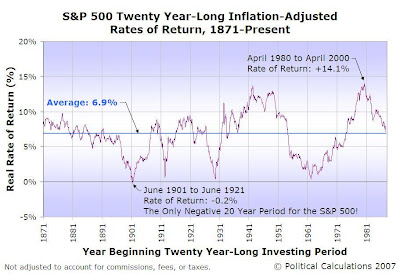 In this chart, we see that we have only one twenty year long period since January 1871 when the S&P 500 provided a negative real rate of return, beginning in June 1901 and ending in June 1921.

We find that for investment holding periods of longer than twenty years, the S&P 500 has historically provided positive real rates of return.