Russell Shaw is a real estate institution, a very successful broker in the metro-Phoenix area who also happens to participate as a contributor to BloodhoundBlog, which is, in our view, one of the top two real estate-related blogs in the U.S.

He has a beef with the National Association of Realtors, which is seeking to increase what it charges its members to enhance their real estate listings on their web site:

Last year I paid Realtor.com about $3,300 to enhance my listings. Now they want to charge me $14,000 for the same thing. Dean Selvey's rate went from $3,800 to $30,000. Those numbers are not typos. Dean no longer does business with them. I told my sales rep that I would not pay it and that I did not want "a special deal for me". I wanted their rates put back where they were for everyone. They were supposed to call me. They didn't call and I don’t believe they are going to call. 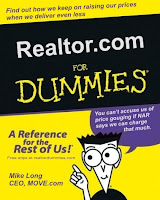 Running the numbers, the NAR's proposed increase would represent a 309% increase for Russell Shaw and a 689% increase for Dean Selvey, all for the purpose of being able to include additional pictures of the properties the agents are seeking to sell for their clients. (These increases go a long way to understanding the context behind the photo Russell included with his post!)

More than anything else, these price increases represent the near-absolute monopoly the NAR has established over the listing of properties for sale in the United States. In essence, the Multiple Listing Service (MLS) owned and operated by the National Association of Realtors *is* the real estate market in the U.S. By and large, if a property for sale isn't listed in the MLS, its prospects for gaining wide exposure in the market and consequently, for being sold at a fair market price, are sharply diminished.

The National Association of Realtor's near-absolute monopoly over real estate listings is so extensive that the Department of Justice initiated antitrust proceedings against the NAR in 2005, which a court upheld late last year. At present, the case is still pending.

But, as part of the antitrust case revolves around the high commissions paid to real estate agents, it also helps explain why the NAR is now seeking such extreme increases in the prices it charges agents for listing their properties on the MLS. Russell Shaw has reviewed the DOJ's web site for the matter and uncovered what may well be driving the NAR's pricing strategy:

This is my favorite page on the site. I liked it a lot because the page it linked from had this quote:

"Brokers typically charge a commission based on a percentage of the home’s sale price. Over the past decade the average commission rate has remained relatively steady between 5.0 and 5.5 percent. As a result, the actual median commission paid by consumers rose sharply along with the run-up in home prices.

Unless broker costs were also rising sharply during this period of time, competition among brokers should have held commissions in check even as home prices were rising."

The word, "costs" was bold on their site, as well. Unless broker costs also went up (where the brokers could actually prove they had to spend more) competition SHOULD have held commissions in check. My costs have gone up in the past nine years. Way up. My acquisition cost per listing and my costs to service each listing has gone up, as well.

In a nutshell, the increases in the prices the National Association of Realtors is charging for "enhancing" listings on its Multiple Listing System are taking place solely for the purpose of hiking costs, so that the commissions paid to real estate agents and brokers will not lowered. That way, if the "cost" for real estate transactions goes up, the government's anti-trust case against the NAR becomes less compelling.

Of course, the only way this pricing strategy can work is if the NAR has a near-absolute monopoly over real estate listings, but we suspect that their attorneys might have a creative argument to dispute that's the case with the DOJ's antitrust division. For those of us in the real world, let's just appreciate the chutzpah involved as being one of the perks of having a near-absolute monopoly!

HT to Russell Shaw (again) regarding the satirical image featured in the upper right corner of this post (click here for a larger image!)