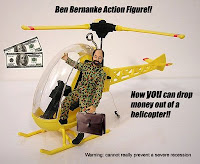 Based on all we're now hearing, the Federal Reserve is getting set to take an axe to its target Federal Funds Rate (FFR), the principal tool the Fed has at its disposal to regulate the supply of money in the economy, which is now set at a level of 4.25%.

Since we already have a tool that models the Fed's actions using something like a Taylor Rule, which incorporates the latest year-over-year change in seasonally-adjusted core inflation and the most recent month's seasonally-adjusted rate of unemployment (based upon a 2001 paper by Greg Mankiw), we thought we'd first see where those latest figures would put us today:

Leaving the values of the Mankiw Factor (at 1.6) and the Mankiw Constant (at 8.5) unchanged, which has produced results that have matched well with where the Federal Reserve's Open Market Committee has set the level of the Federal Funds Rate target since 1999, gives us a target FFR of 4.40%. With the target now at 4.25%, this result suggests that the Fed should actually be considering raising rates to head off inflationary pressures in the U.S. economy.

However, as Jim Hamilton has found, the market isn't anticipating higher rates of inflation for the U.S. economy, as measured by the yields and spread between nominal and inflation-adjusted 10-year treasuries, which opens the door for a rate cut.

Cutting the FFR target now would seem to be a sharp divergence between what the Taylor Rule would suggest the Fed should do and what the Fed will actually do. Fortunately, we've already have evidence for where this has happened in the recent past, which we've presented in the chart below: 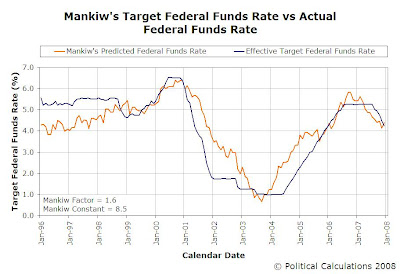 The divergence when the Fed pushed its target FFR well below what would be expected using a Taylor Rule begins shortly after January 2001. Here, the Fed cranked up the money supply in response to a worsening economy, later aggravated by the fallout from the September 11, 2001 terrorist attacks. Stimulating the economy by cutting the Federal Funds Target Rate by way more than what the Taylor Rule would suggest is wise would be the Fed's version of taking its monetary policy dial and turning it up to eleven. Where our tool is concerned, the same effect can be obtained by cranking up the Mankiw Factor to correspond with a much looser monetary policy. 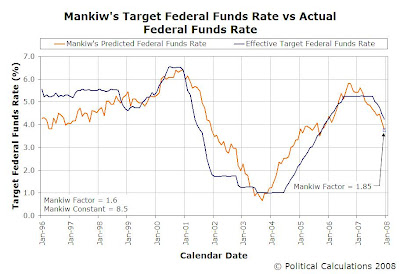 No matter what this month, we'll soon find out how far the Fed is willing turn up the dial to stimulate the economy in 2008.