Prospects for the US economy and stock markets are improving, despite the wild daily gyrations on Wall Street.

The yield curve - measured as the gap between 10- and two-year Treasury yields - this week steepened to its most upward-sloping since autumn 2004. This matters because the curve is a great lead indicator of economic activity, with upward slopes signalling recovery and inversions signalling recessions. Research by Jonathan Wright of the US Federal Reserve suggests that current bond yields and the Fed funds rate point to there being a less than one-in-30 chance of recession in the next 12 months. This is consistent with the economy being in recession now, because the yield curve predicted that a year ago.

This in turn matters because the ratio of these Fed custody holdings to the value of US shares (as measured by the Dow Jones Wilshire 5000 index) is a great lead indicator of subsequent annual returns on US stocks. High Fed custody holdings relative to share prices in 1988, 1991, 1995 and 2003 all led to good returns on the S&P 500. With this ratio now at its highest since early 2006, it should support the market, as it means there's lots of global liquidity chasing few US shares.

In the article, Chris presents a chart showing the correlation between the changing level of the Fed's custody holdings and the S&P 500. He also notes a darker cloud in that U.S. banks are tightening their lending requirements against business and commercial property at a record rate, but notes that this is not a leading indicator of stock market moves. As they say, RTWT!

As always, you can find the latest probability of recession in the U.S. twelve months from last Thursday graphically presented in Recession Probability Track feature in our right hand margin. Chris' description of what the recession probability track has shown over the past year is correct - the probability of recession peaked on 4 April 2007 at 50%, which is fully consistent with the economic turmoil we see developing today just about a year later.

Now for what we see in the futures of the stock market today. The building peak of distress in the market has again shifted sooner and may well occur by the end of this month or early in March: 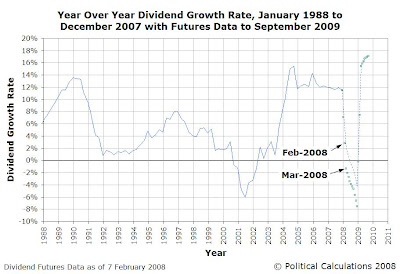 Interesting, the latest data presented in this chart would suggest that a second spike might occur in January 2009, but as we've seen over the past several days, it's rather pointless to hold to that given how fluid this measure has been over the past two weeks. Keeping with our new market prediction policy, we're just going to observe it and how it changes!