In recently reviewing the New York Times' SEC filings to chart its declining circulation, we found something a bit surprising and, in our view, potentially misleading for the company's common stock shareholders. First, here's the table showing the NYT's summary of executive compensation that the company provided in their 2008 proxy statement (page 40):

Now, here's the summary compensation table published in the New York Times annual meeting notice and proxy statement from one year ago (page 35):

So we see that in comparing the two tables, the "Bonus" column has disappeared. Let's look next at the Summary of Executive Compensation table from the New York Times' 2006 proxy statement (page 22): 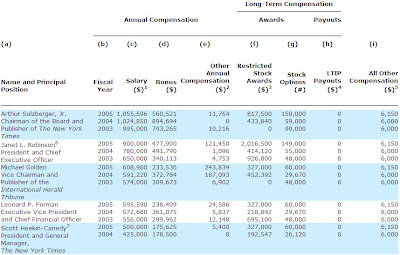 Hey look, huge bonuses! But wait a minute - isn't that $560,521 figure for Arthur Sulzberger Jr.'s Fiscal Year 2005 bonus exactly the same one we saw listed for him in the 2007 proxy statement's table as "Non-Equity Incentive Plan Compensation" for Fiscal Year 2006?

Why, yes it is! And it appears that Mr. Sulzberger asked that his 2006 bonus "be limited to the same amount he was paid a year earlier," which accounts for why the numbers are the same.

Only thing is, it's now called "Non-Equity Incentive Plan Compensation," instead of "bonus."

And that new column in the 2008 proxy statement for "Bonus," which suggests that Mr. Sulzberger isn't receiving a bonus for Fiscal Year 2007, is now looking really misleading. He is, and it's a lot of money, but now it's being called something else.

But with that "Bonus" column back in the table, how long might it be before it's filled again?

If you were a shareholder going to attend the company's annual meeting on Tuesday, April 22, 2008, knowing that large layoffs are coming, that advertising revenues are off substantially in the face of sharply declining circulation, and now this shift in terminology used in the company's proxy statement to muddy the waters, as it were, regarding its executive compensation, don't you think you should be getting some answers as to how they might expect to realize these bonuses? Does the company's leadership have any real plan at all to turn the newspaper's declining fortunes around? Or are they just there to collect paychecks and stock dividends for as long as the business lasts?

It's not like the journalists at the New York Times' business section will ask tough questions of their bosses for you! Not if CNBC's interview of GE CEO Jeffrey Immelt is any indication of how media employees interview their bosses....

Update 18 April 2008: Did we mention the New York Times' declining fortunes? The Times' just announced an unexpected and large first quarter loss for 2008.