Political Calculations
Unexpectedly Intriguing!
29 May 2008
Build Your Own Income Tax!

Are you tired of today's income taxes? Do you find them too complicated? How frustrated do you get by not being able to figure out how much you'll either owe or get back from the government until you've spent hours and maybe hundreds of dollars actually preparing your Form 1040?

Isn't there a better way to pay for all that government we get? One that's pretty transparent and doesn't load up on special tax breaks for politically connected people? One that can fairly apply income taxes across the full spectrum of the nation's income earners?

Here at Political Calculations, we don't know if your way might be better, much less just what your way might be, but we can put the tools in your hands that you can use to build a brand new income tax code from scratch!

But more than that, we can also show you how successful your new income tax system might be in collecting money compared to today's system, at least, for 2005-06, right along with working out how much your tax bill would be under your system so you can compare your actual tax bill with your proposed option.

And it all starts below.... 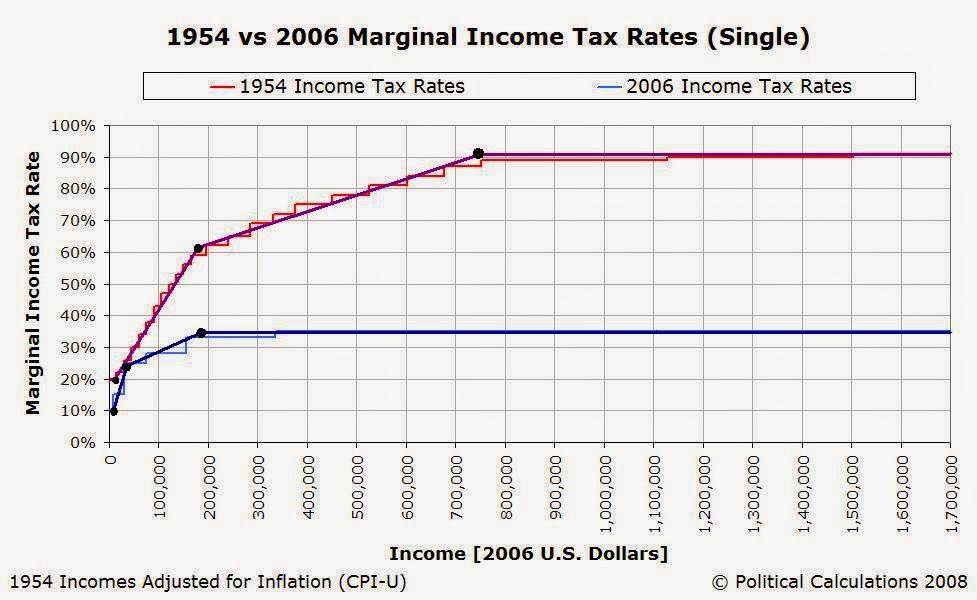 Previously, we showed that all you need to define a progressive tax rate schedule like the U.S. has today is just three points of data, which effectively define the following:

Of course, a progressive income tax rate structure is nice, but what if you want an easy way to explore a flat tax? Or maybe you'd like to see what would happen if you set up a taxable income cap like Social Security has? Then again, you might be the kind of person who would like to impose a super high income tax rate or surtax for those who earn super high incomes. Sure, you could play with the numbers you enter for the progressive tax rate data table above to get these effects, but wouldn't it be really nice if you had a super easy way to check out these possibilities?

If any of the above describes you, we have a solution for you. The "Super Tax" data table below the progressive tax data table will let you set up a special tax rate that will override part or all of the progressive rate tax table above so you can explore these possibilities! For example, if you enter $0 for the income level where your "super" tax rate begins, you'll have a flat tax system for whatever tax rate you enter! Alternatively, you could set the tax rate to 0% and the income level greater than $0, setting up a Social Security-style taxable income cap. Or set that super high tax rate that only applies to people earning super high incomes, while keeping your progressive tax rate structure in place.

Speaking of which, if you'd rather just stick to the progressive tax rate structure you've outlined in the first table, just leave the data entry field in the "Super" tax data table blank. It's all up to you!

Tax Breaks for All!

That has a nice sound to it, doesn't it? More seriously, in setting up the tax rate structure above, we haven't really considered the plight of the poor nor the things for which most people feel they ought to catch some sort of a break in the tax code to accommodate.

In considering the various options of how the government "gives back" before it takes away, we found that tax credits work a lot better and are a lot more transparent than tax deductions that exempt certain amounts of income from taxation - with a progressive income tax, tax deductions are *the* reason why nobody knows how much they'll pay or get back until after they file their tax returns!

More than that however, we believe that whatever break on paying taxes there might be ought to apply to individuals only. The amount by which taxes are affected should only depend upon the number of individuals covered on a given tax return and not upon the multitude of things that really only benefit very specific handfuls of people in the 67,024+ convoluted pages of the current U.S. tax code.

Your role, should you choose to accept it, is to decide what the value of that tax credit per individual should be. Then click the "Calculate" button and give us a bit to run all the numbers (we're running a lot, but we should get through them all without crashing! Update: Should you get an error message on your Internet browser asking to abort or continue, click the continue button - you're not far away from finishing):

We've found how much the government would collect across the board from your income tax plan and compared it against what the government shows it collected from personal income taxes in 2006 (see Table 8 here if the link is no longer current), as well as the level of GDP in 2006, which serves as our benchmark year. Our results and comments on your plan follow....

In case you were wondering, our comments are directly driven by this analysis.

At this point, the only thing that stands between you and seeing how your income tax plan might work is your own personal data that we need to do your own taxes! Just enter the indicated data below, then click the "Calculate" button. We'll do the rest....

And here is how you would fare under the income tax plan you've outlined in the tool above.

Some Fun Numbers With Our Default Data

For 2005-06, for which we modeled the household adjusted gross income distribution, exemptions per tax return and compared your plan against the results of the tax rates in effect in that time, the minimum wage was $5.15 per hour. Someone earning minimum wage and working full time for a full year would make $10,712. Try that number and adjust the number of individuals represented on a return with an eye to the following table outlining the income thresholds for poverty for 2006:

So, not only did our default data fill the U.S. Treasury with the nearly the same amount of the taxpayer's cash as did the current tax code did from personal income taxes, our version of the tax code would virtually eliminate poverty for all working people. When you consider that the government will spend 4% of GDP in any given year, or rather, about half what it collected in 2006 in personal income taxes to fail to achieve the same goal, shouldn't we be considering re-doing the tax code along the lines that we've proposed?