Political Calculations
Unexpectedly Intriguing!
05 May 2008
How Much Does the US Rely on Personal Income Taxes?

Pretty darn much, as it turns out! Here's a snapshot chart for 2006, the last full year for which complete data is available (remember, people were still paying their taxes for 2007 as recently as three weeks ago, and that doesn't count all those who filed for extensions on April 15 instead!): 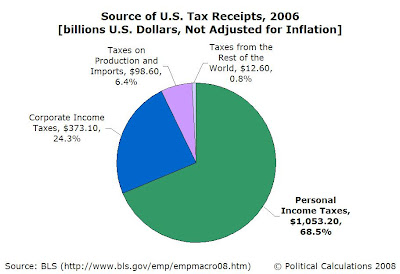 The original source data is here. The chart above shows the amount of collections taken in by the U.S. government from its primary, non-social insurance taxes. Social insurance taxes, like Social Security and Medicare, have their own dedicated taxes, and do not directly feed the U.S. Treasury, as the personal and corporate income taxes, as well as taxes on production, tariffs, etc. listed in the chart do. 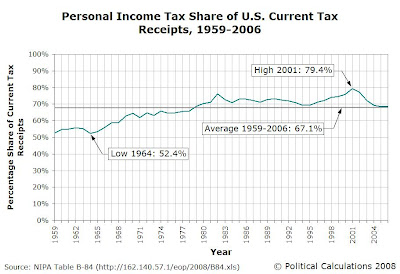 We find that 2006's percentage share of 68.5% is slightly above the long term average of 67.1%. In quickly scanning the chart, we see that the peaks of personal income tax collections as a percentage of all current tax receipts often occur in major recession years, with 1982 and 2001 being the standouts. This effect is likely due to the real-time reduction in corporate and other taxes during such times of economic distress, while collections from personal income taxes initially stay high until unemployment rates increase later.

Regardless, at an average of more than two-thirds of all current tax receipts for the period from 1959 through 2006, the U.S. federal government is highly dependent upon collecting personal income taxes.