Political Calculations
Unexpectedly Intriguing!
24 June 2008
Stock Prices: Normal Until They're Not, But They're Not Normal!

What if we treated the relationship that we've uncovered between stock market prices and dividends as if it were determined by a normal distribution? Could generating something like a control chart based our model of that relationship tell us something about the stock market?

Those are the questions we began asking after we unable to rule out the possibility of a normal distribution defining periods in which a stable order exists between stock prices and dividends after using a number of statistical normality tests. Having explored how to recognize disorder and later how to recognize the emergence of order when it appears in the stock market, we described stock price changes as seeming to be "the result of normal variation until they're not."

Let's Do Something Wrong! 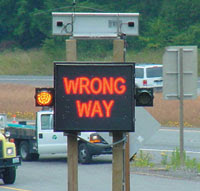 Confusing? You bet! That's why we've decided to deliberately do something wrong in our analysis. We already know with some certainty the variation we observe between the index value of the S&P 500 and the index' dividends per share stock market is really driven by a kind of power law distribution - the equation we've developed describing the relationship between the two makes that clear. So why would we knowingly do something that's perhaps inappropriate?

In deliberately doing something we know is wrong, we're going to apply the immortal words of George Box, "all models are wrong, but some are useful." In this case, we're going to specifically explore whether using the well-defined techniques of common statistical analysis can help us identify when order exists in the stock market and when order breaks down. Why not exploit our inability to completely rule out the existence of a normal distribution defining the variation of stock prices vs dividends per share during periods of relative stability to our advantage?

Since we've already charted the most recent multi-year period of order in the stock market, beginning in June 2003 and continuing through December 2007, we chose this period as the ideal place to begin. The following chart shows what happened when we found the standard deviation between the average of the S&P 500's daily closing value for each month in this period and plotted it versus the index' corresponding trailing year dividends per share, using it to define control chart type features: 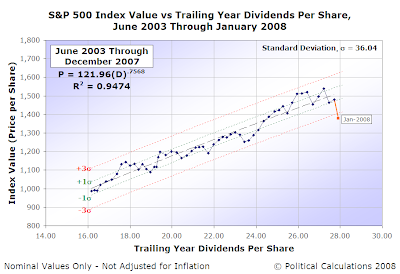 The period extending from June 2003 through December 2007 contains some 55 individual data points. Of these, some 40 fall within the plus-and-minus one standard deviation, or 73%. For a normal distribution, we would expect 68% of the individual data points to fall within this range, so the incorrect assumption of a normal distribution for our purposes may not be that bad. All of the remaining points, until this period of order ended in January 2008, fall within the plus-and-minus three standard deviation "control limits," which compares to 99.7% for a true normal distribution. Again, this is pretty consistent with what we could reasonably expect with our deliberately wrong assumption.

We also notice something interesting, which hints at why using a normal distribution to analyze the variability of stock prices with respect to dividends per share may be useful. Toward the end of the period of stability covered by this data, we notice a number of downward shifts in stock prices that are not consistent with previous variation. Roughly at a trailing year dividend per share value of $26.50, we see a greater than two-standard deviation shift downward in the average monthly value of stock prices in going from July 2007 to August 2007.

Stock prices rebounded, but we see another similar two-standard deviation shift again between October 2007 and November 2007. We finally see a slightly bigger shift coinciding with the downward plunge that occurred from December 2007 to January 2008.

It occurs to us that this two-standard-deviation downward shift may be a useful indicator for anticipating when order may be beginning to break down in the stock market.

Where We're Going From Here

We're going to back in time to find out if that hypothesis holds water. Over the weeks ahead, we'll progressively go back and identify previous states of order that have existed in the stock market that are defined by our derived relationship to see if similar "signals" were sent prior to their breaking down.

But for our next post on the topic, we'll close the books on June 2008 and review apparent order that may have taken hold since the disruptive events of January 2008. With corporate earnings expected to rise in the third quarter, we'll see if June 2008 represents the last of the fallout among the S&P 500's financials, and what we might reasonably be able to expect for the rest of the year if the current state of order continues.