Late next week the government will release initial estimates of real economic activity in the second quarter. Not long ago, in early April, when the quarter was just beginning, the consensus forecast for Q2 2008 real GDP growth was 0.0%, with as many economists predicting contraction as were predicting growth.

Now, three months later, the consensus is up to 2.2%. And no surprise - we are forecasting a 3% growth rate, more bullish than almost any other economist.

Here's what Wesbury anticipates will drive GDP to the high end of the forecasters' consensus:

Personal Consumption: We already have full consumption data for April and May as well as auto sales and retail sales for June. The only piece missing is June services. We estimate real consumption grew at a 2.0% annual rate in Q2. With consumption accounting for 70% of GDP, real PCE will contribute 1.4 points to real GDP growth (1.4 equals 70% of 2)."

Business Investment: Data through May show business investment in equipment and software was unchanged in Q2. However, business construction continued to boom, suggesting overall real business investment will grow at about a 6% annual rate in Q2. With business investment accounting for about 10% of GDP, this translates into 0.6 points for real GDP growth (0.6 equals 10% of 6).

Housing: Data on home building suggests a decline at about a 23% annual rate in Q2. Given that the sector makes up roughly 4% of GDP, this translates into a drag of 0.9 points on real GDP growth (0.9 equals 4% of 23).

Government: Federal defense spending and public construction at all levels of government were unusually strong, suggesting gov’t spending accounts for 0.5 points worth of real GDP rather than the 0.3 or 0.4 trend.

Trade: The inflation-adjusted trade deficit has been shrinking rapidly. Even assuming no additional improvement in June, net exports will add about 2.0 points to real GDP growth.

Inventories: We assume businesses around the country reduced stockpiles at an annual rate of $37 billion, the largest reduction since the 2001 recession," which Wesbury expects to alter real GDP by -0.6 points.

With the math laid out like this, getting to Wesbury's predicted GDP is just a matter of adding and subtracting these anticipated values. Here it is all laid out in formula form:

Not bad for this recession the major news media says we're in! Speaking of which, the next chart shows the probability that the U.S. is in recession today (calculated using data from one year ago!): 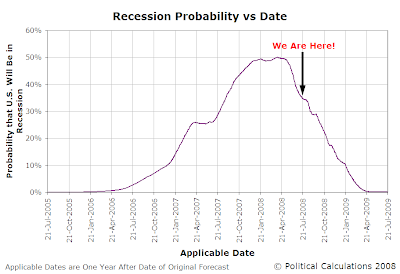 Can there even be a recession if the growth rate of real GDP never turns negative? Perhaps there could be, given how badly far off the BEA's originally reported GDP figures were in 2000 from where they were later revised to be, which at the time, masked the extent to which the economy was sliding into recession during the course of that election year.

Who's to say that similar political considerations aren't skewing how the data is being reported today?