"Your whole case against the Public Policy Gang on the teen job disappearances is going to fall apart," the voice on the other end of the line said. "How soon can you come to my office?"

That's something that doesn't happen every day. If the man responsible for keeping the cash flowing through the economy is paying attention, the stakes must be pretty big.

The Paymaster's office resembles a bank. Classic architecture, complete with massive columns, elegant appointments, solid construction and armed guards. Everything is aimed at projecting an air of confidence, stability and control. The Paymaster fits his office, or rather, tries to fit. It doesn't always work.

"I've been following your case with interest," the Paymaster said. "There's a pretty big hole in your analysis that the Policy Gang could use to avoid responsibility."

"How do you mean?" the Economic Detective asked. "We've got their motive, we know how they pulled it off and the timing all fits. Hell, they even brag about what they did in jacking up the federal minimum wage. They're definitely the ones behind all those teen jobs going missing."

"Perhaps they are," the Paymaster evaluated. "The problem you face is showing that what they did, did in fact cause those jobs to vanish. Right now, all your case shows is that those job losses are correlated with the gang's activities. And we all know that correlation does not imply causation. Even freaks know that. 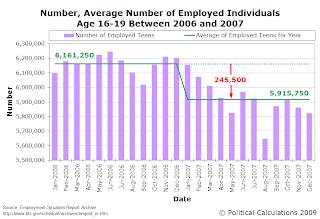 "Right now, you've shown that those Age 16 to 19 have had hundreds of thousands of job opportunities disappear, but that could be any job, paying anywhere from minimum wage on up to whatever Hannah Montana might be making these days.

"To really prove your case, you'll need to demonstrate that the jobs most affected by the change in the minimum wage are in fact the ones being lost. You need to show that it is the minimum wage jobs held by teens that are disappearing to prove causation. You have a lot of work left to do. "

And with that, the Economic Detective was back to work. But where to start?

Economic investigations are a lot like mining for gold. You have to sift through tons of crushed rocks in hopes of finding a single gold nugget. But if you can find that one, you might be able to find the vein of ore it came from and mine for more. The first nugget found in this case lay in a bed of revised data from the Bureau of Labor Statistics. Could the vein be nearby?

The Economic Detective hit pay dirt. The Data Jocks at the BLS put together a study every year on the characteristics of minimum wage workers. In it, they break out who makes the federal minimum wage or less each year. 2006 and 2007 were no different. We pulled the appropriate numbers from the reports:

From these numbers, it seemed that just 63,000 of the 245,500 jobs we knew had been lost for teen between 2006 and 2007 were minimum wage earning jobs. But something about these numbers didn't sit right. The Economic Detective kept digging, when suddenly he had a flash of insight. 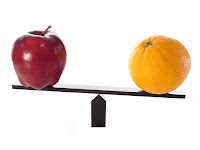 Using the tool, we first used the data we had for the level of the federal minimum wage of $5.15 per hour in 2006 to see what kind of error there might be, before estimating the number of people making $5.85 per hour. The table below shows our results:

Given what we know of the distribution of hourly wages in the U.S., that figure of 2,681,439 makes a lot more sense. To get to the number of teens earning $5.85 or less in 2006, we'll need to multiply this figure by their percentage representation in the workforce. Here, we'll split the difference between the percentages we found for minimum wage earning teens in 2006 (25.77%) and 2007 (21.57%) and use 23.67%, since we don't know the exact proportion of teens earning $5.85 or less in 2006. Using this approximation should put us fairly close to the actual number. 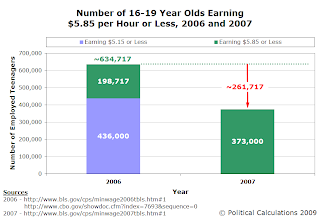 That would more than account for the 245,500 figure that we had found previously. We therefore find that *all* of the jobs for teens that disappeared between 2006 and 2007 were, in fact, minimum wage earning jobs. More specifically, they were positions whose hourly wage was $5.85 or less - the exact jobs directly affected by the Public Policy Gang's increase in the federal minimum wage.

And that's when the Economic Detective was startled by a final gruesome discovery. Having focused so much on the mysterious disappearance of jobs for teens in an otherwise good year for the U.S. economy, he hadn't looked beyond those numbers except in passing, but here they were now staring him right in the face. Looking at the estimated data again for 2006, there should be around 2,681,439 individuals earning an hourly wage of $5.85 or less. But in 2007, there were just 1,729,000 individuals counted as doing so.

But for teens, the mystery had been solved. Now there was only one thing left to do in that case, so the Economic Detective did it. He closed the file.