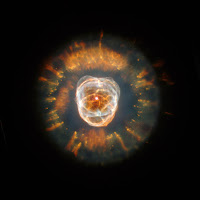 What's more, when we looked at other periods of stock market history, the apparently constant amplification factor was itself not constant. For example, in looking at the period of the 1980s and early 1990s, we found a value of 18 better correlated dividend changes with stock prices, in contrast to the lower value of approximately 9 that we found for the period since 2001.

So, it would appear that where the stock market is concerned, we have a system that operates in a pretty chaotic fashion, with stock prices following the signal sent by changes in the expected future growth rate of dividends per share. Fortunately, we have a name for that: Chaos! In the words of Wikipedia:

Chaotic systems are systems that look random but aren't. They are actually deterministic systems (predictable if you have enough information) governed by physical laws, that are very difficult to predict accurately (a commonly used example is weather forecasting).

More specifically, we call the kind of behavior that we've now observed in the stock market deterministic chaos.

But it's not quite that simple either. The stock market is the venue through which millions and millions of participants interact with one another as billions upon billions of transactions are conducted. Consequently, the stock market can be a pretty noisy place and in fact, noise is always present.

If we consider the change in the expected growth rate of dividends in the future to be the signal driving changes in the price of stocks, noise would consist of any transaction resulting from an investment decision not tied to that signal. For example, various investors might follow a calendar-based investment strategy, or they conduct trades to minimize their tax exposure, to settle the requirements of property division in a divorce, etc.

From time to time, the level of noise in the market can even overwhelm the dividend signal as market participants disregard it altogether: the Dot-Com Bubble of April 1997 through June 2003 perhaps being a classic example.

So how much of the change in stock prices is driven by signal and how much by noise?

Writing in A Random-Walk or Color-Chaos on the Stock Market? Time Frequency Analysis of S&P Indexes in 1996, Ping Chen found in looking at the S&P 500 monthly index (FSPCOM) from 1947 to 1992 that (emphasis ours):

The reconstructed HPCg time series reveals the degree of deterministic approximation of business fluctuations: The correlation coefficient between the filtered and original series is 0.85.

Their ratio of standard deviation, h, is 85.8% for FSPCOM. In other words, about 73.7% of variance can be explained by a deterministic cycle with a well-defined characteristic frequency, even though its amplitude is irregular. This is a typical feature of chaotic oscillation in continuous-time nonlinear dynamical models.

Elsewhere in the paper, Chen observes the approximate average period of oscillation to be approximately 3.6 years, coinciding with the average duration of business cycles.

Chen's work is really remarkable when you consider that he performed his time frequency analysis without knowing what the signal driving those changes in stock prices really looks like, using the phrase "color chaos" to contrast the changes in stock prices driven by apparently deterministic forces with a harmonic period against those driven by "random-walk," or rather, "white noise" factors. What's really cool is that we found what those determistic forces would appear to be and how they would appear to operate.

We'll conclude by sharing Chen's phase space portraits of the historic monthly S&P 500 index value, which reveal his discovery of both the chaotic strange attractors (underlying order with a cyclic pattern) and the type of noise apparent in the S&P 500's stock prices: