That's the question we're tackling today, as we first hinted over at Econbrowser that January 2009 may well represent the bottom of the current decline in stock prices, at least as measured by the average of each month's daily closing prices for the S&P 500.

Previously, we indicated that this particular measure was a particularly good indicator of both market distress and recessions in the U.S., but we had only presented data spanning the modern era of the the stock market, since January 1952, and limited it to just coincide with the largest spikes in the value of the ratio coinciding with recessions.

Today, we're expanding our frontier to include all our trailing year data for the S&P 500, covering some 1,645 datapoints spanning each rolling one-year period since January 1871. The chart below reveals our calculated value for the Price Dividend Growth Ratio from January 1872 through January 2009: 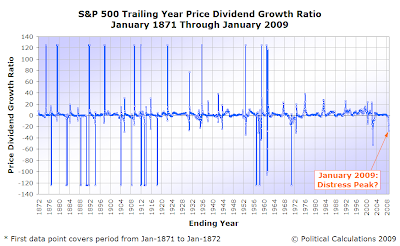 Note: We've arbitrarily capped the extreme values of the Price Dividend Growth Ratio in the chart above at +125 for positive values and at -125 for negative values. These very large spikes coincide with periods in which the denominator of the trailing year compound annualized growth rate of the S&P 500's dividends per share was equal to zero, which would otherwise result in a spike of infinite value.

We next counted up all the spikes in the Price Dividend Growth Ratio, broadly defined as the absolute value for a given month being greater than the absolute value of the ratio for both the month preceding the spike in value and the month following the spike in value. We used a similar broad definition of a market bottom, in this case counting every occurrence of a month whose average monthly S&P 500 index value was lower than that for the months both preceding the trough and following the trough.

Overall, we counted some 322 spikes in the absolute value of the Price Dividend Growth Ratio and 323 troughs in the average monthly index value of the S&P 500.

Update 6 February 2009: We should have thought of this yesterday, but if we subtract out the 24.2% of the troughs occurring in the same month as a Price-Dividend Growth Ratio spike from the 59.6% of stock price troughs occurring within one month of a spike, and noting that it can't be December 2008 because stock prices were higher then than in January 2009, we find that the odds that February 2009 will mark the bottom of the current decline stock market to be 35.4%.