If you were a corporate CEO, when would be the right time to write losses off your books?

Here, you recognize that you have unique opportunities tied to unique events, which you can use to your advantage simply because the stakeholders in your business expect changes and will be less likely to resist your efforts to impose them.

That thought occurs to us today, as we've just reviewed the latest projection of corporate earnings for the S&P 500. Needless to say, compared to the last time that we looked at these earnings less than two weeks ago, a lot of CEOs would appear to be leaping all over themselves to get all the bad news and losses out while they can: 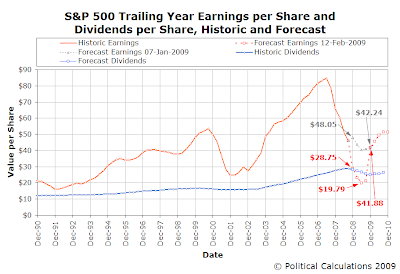 Update 25 February 2009: Quick heads up for Barry Ritholtz' fans! The trailing year earnings data in particular has continued to slide since we created this chart. The following numbers shown on the chart would change as follows (at least as of 23 February):

The forecast earnings slowly improves from there. Note also that forecast trailing year dividends per share has declined from $24.90 to $24.60. Our original source for the data is S&P’s Earnings and Estimates spreadsheet.

As Reported earnings are negative for the quarter, with or without Financials (positive ex/Financials and COP)

House cleaning should be massive enough to keep first half of '09 clean of 'items', after that it depends on the economy

A previous version of this document had noted that CEOs were apparently throwing everything including the "kitchen sink" into the items they were writing off, trying to strip their books of all the potential bad news they could.

Meanwhile, Howard Silverblatt finally manned up (as opposed to "chickening out") and released his estimate of trailing year dividends per share for the S&P 500 for calendar year 2009!

He now projects the indicated dividend rate for the S&P 500 will be $24.90 for 2009. We used this estimate to project where 2009-Q1's dividends per share will come in at and combined that estimate with what the dividend futures market is expecting as of 12 February 2009 to produce our overall forecast of where dividends per share will go for 2009, which we've graphically presented in the chart above.