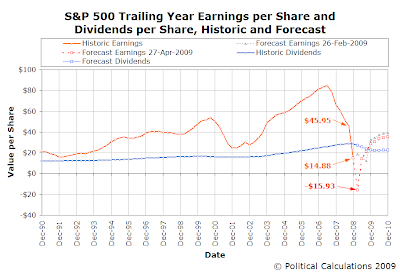 The last time we looked at the earnings of the S&P 500, we described them as being "an even deeper earnings bucket," as they had significantly decreased from when we had charted them just two weeks earlier.

Today, the expected trailing year earnings for the S&P 500 in the first quarter of 2009 don't look much like a deep bucket so as much as they look more like a really nasty crevasse. We'll also note that the first quarter of 2009 would mark the first time since the S&P 500 was originally developed in 1957, that the index' trailing year earnings has ever been negative.

Looking forward to the end of 2010, a long, slow climb appears to be in the cards for earnings in the S&P 500 given S&P's latest indications.