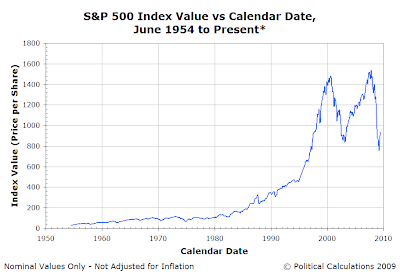 We ask these questions today since we recently went through much of the modern era of the U.S. stock market, almost decade by decade, identifying when either order prevailed in the market or when disorder ruled the behavior of stock prices. And to answer them, let's begin by first considering the chart in the upper right hand corner of this post.

Can you, just by looking at that chart, identify when stock prices were behaving predictably for periods extending from quarters to years in duration? Can you tell when it stopped? 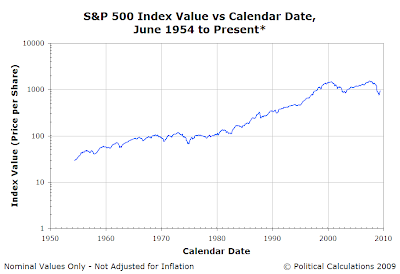 How about if we alter the scale of the chart so that the value of the S&P 500 index over time is presented in a logarithmic scale? Stock prices have, after all, seen exponential growth over much of the period that we're showing in the chart, so maybe putting things in this perspective can help.

So do you have any more insight into whether stock prices behaved in an orderly fashion during any part of the 55 years we've shown? You might, for instance, now be able to better identify the Black Friday Crash of October 1987, but can you identify when, exactly, the Dot-Com Bubble really took off? 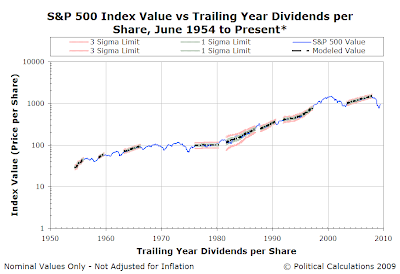 We won't keep you in suspense any longer. By our math, stock prices behaved in an orderly manner roughly 51% of the time, or rather for 337 months out of the 661 months spanning June 1954 through June 2009.

The chart to the right places control chart-style thresholds around the periods we've identified as being when stock prices would appear to have behaved as if they were in a Gaussian, or normal, distribution. Doing this, we can also identify where this kind of order doesn't apply. In doing that, we can more clearly identify periods such as the Dot-Com Bubble, which we can now see to have run from April 1997 through June 2003. 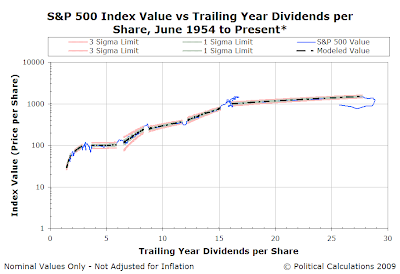 But that still doesn't answer the question of why knowing whether order exists or does not exist in the stock market might be important to an investor. For that, we'll tweak our last chart so that we show the value of the S&P 500 against its trailing year dividends per share.

Doing that, we can see that the existence of relative order in the stock market coincides with something that stock market investors should really care a lot about: the upward movement of stock prices! 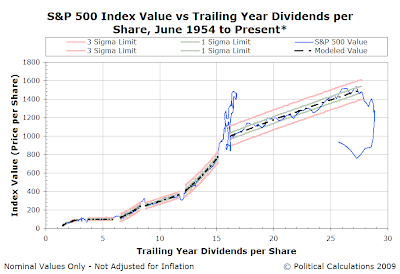 But in our view, the logarithmic scaling of stock prices in this chart really doesn't do justice to what's really going on. For that, we'll switch back to present stock prices in normal scale.

We can now easily confirm that when order has been present in the stock market, it accounts for nearly all of the sustained increase in the level of stock prices.

In fact, if we exclude the current period of disorder which began in January 2008, we find that periods of order account for 1168.76 of the gain in stock prices. Periods in which disorder reigns account for 281.5 points of the increase in stock prices from June 1954 through December 2007. If we do include the current period of disorder, we find that at present, all periods of disorder would be associated with a 260.27 point negative contribution to overall stock prices since June 1954.

If you were an investor, wouldn't it be in your best interest to know if the stock market is behaving in an orderly fashion?