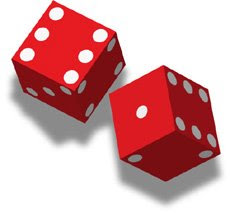 Back on 20 April 2009, we bet our entire retirement portfolio on the S&P 500. Last week, on Thursday, 11 June 2009, we followed through on what we were thinking about doing just last Monday and sold it.

You could say we decided we felt, well, lucky....

And that's saying something after the run we had! $100 in our account grew to $114.18 during the 52 days we were fully invested in the S&P 500, which works out to a 153.8% annualized rate of return. Not including the effects of dividend reinvestment, our return would have been 143.6%.

If we had invested one day sooner, on 19 April 2009, our non-dividend reinvested annualized return would have been 79.2%. One day later, on 21 April 2009, we would have realized an annualized rate of return of 110.5%. So we certainly got lucky with our timing back then!

Clearly however, we missed the timing last Thursday. While the S&P 500 closed at 944.89 on that date, just a day later, it closed slightly higher at 946.21. So why did we choose to sell Thursday instead of Friday?

First, we aren't particularly gifted at timing the market. While we've had some success at anticipating where stock prices might go, we don't really have all that good a sense of when exactly they might get there. In fact, our decision to sell on Thursday was determined by two factors:

So we didn't. Next, we'll find out if feeling lucky and being lucky are two different things!