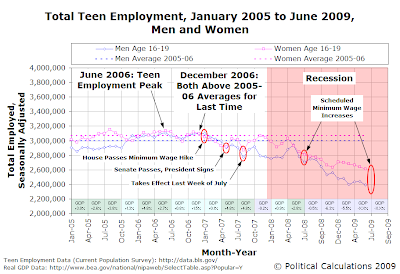 In December 2006, roughly equal numbers of male and female teenagers were employed in the United States, with 6.2 million working overall. As of June 2009, teen girls outnumber teen boys in the Age 16-19 employed population of the U.S. by 219,000, as the total number of employed teens has dropped just below 5 million. As our chart demonstrates, the spread between working teen boys and teen girls, which first established itself following May 2007, is getting wider as the current recession progresses.

That's remarkable in part given that teens are not generally employed in the sectors of the economy that have been hardest hit by the current recession: home construction, finance, banking and the automobile industry. While each of these fields have disproportionately high male representation, that shouldn't affect male and female Age 16-19 employment numbers because of the combination of education requirements (which blocks teens without college degrees from the finance and banking industries), child labor restrictions (which affects those under Age 18 and effectively bars these individuals from employment in many parts of construction and manufacturing trades), and insurance liability premiums (which makes hiring those Age 18 and 19 less desirable in the construction and manufacturing industries given the high rate of injuries sustained by these individuals compared to older workers.)

So there's no good reason why we should see such a gender disparity in teen employment figures. And yet, we do.