The Federal Reserve of the United States is chartered by the U.S. Congress to promote two goals: "stable" prices and "maximum" sustainable output. Traditionally, promoting stable prices has meant controlling the rate of inflation, while maximizing sustainable output has generally meant encouraging economic growth to maximize the rate of employment, at least as far as monetary policy can be applied to do so. Of these two tasks, controlling the rate of inflation has been a core responsibility of the Fed since its founding in 1913 (promoting maximum output and employment was added to the Fed's mandate in 1977), so we though we might take a look at how well the Federal Reserve has done at its principal task throughout its history.

To do that, we need to compare how the rate of inflation has changed from the period before the Federal Reserve was formed to the period afterward. For that comparison, we'll draw upon the Consumer Price Index data for all Urban Consumers for the period consisting of each calendar month from January 1871 through the present collected by Robert Shiller. 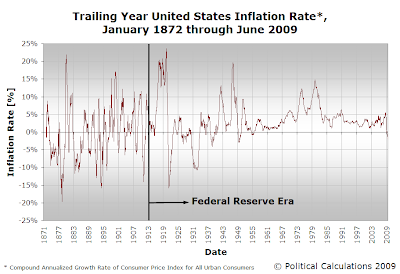 Using the CPI-U data, we calculated the trailing year compound annualized growth rate of inflation for year long period, with the first data point covering the time span from January 1871 through January 1872. We then charted the results, marking the point at which the Federal Reserve came into existence.

Mostly, but not always. The greatest rate of recorded inflation ever in the U.S. occurred in the years from 1916 to 1920, which coincides with the first World War, which came as a result of the Fed's decision to monetize European gold that had been moved to the U.S. for safekeeping during the war.

Meanwhile, we see inflation rear its ugly head again following the onset of World War 2, as wartime production requirements quickly absorbed all surpluses of many goods, resulting in their prices going up sharply. After that, we see what might best be described as "demographically-driven" inflation begin running amuck from the mid-1960s into the early 1980s, coinciding with the entry of the baby boom generation into the U.S. workforce.

But that leaves just the post-World War 2 inflation spike of the late 1940s as not having been accounted for - we might just have to put our detective to work on resolving what was behind that spike sometime in the near future.