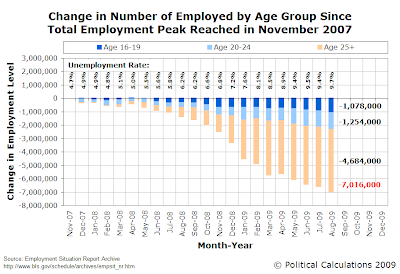 But that's not the only grim milestone for teens these days. Since the current recession began in December 2007, over one million teen jobs have been eliminated, as 1,078,000 fewer teens are now employed as compared to when the level of total employment in the U.S. last peaked in November 2007. Of the total 7,016,000 jobs that have been lost during the recession, teen jobs represent 15.4% of the total, or roughly 1 out of every 6.5 lost jobs. 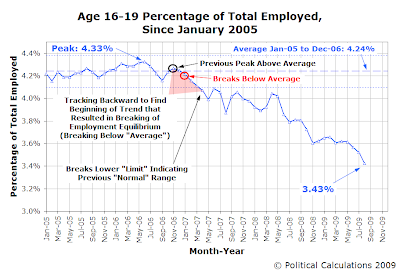 As a percentage of the entire U.S. workforce, those Age 16-19 have gone from 4.33% in June 2006, when total teen employment last peaked to 3.43% in August 2009. Teens are therefore now nearly 4.5 times more likely to have been impacted by job loss during the recession than their percentage within the workforce would suggest. 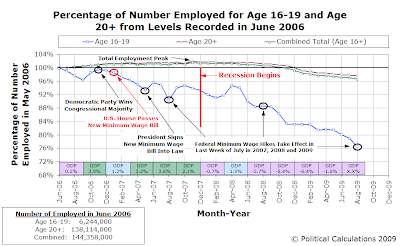 Since teen jobs peaked in June 2006 at 6,244,000, the employment figures for August 2009 reveal that 1,461,000 teen jobs have been lost. Of those, 46,000 were lost between June 2006 and the end of that year. The remaining 1.415 million teen jobs have been lost since January 2007, when the U.S. House first passed legislation for increasing the U.S. federal minimum wage. The last increase in the U.S. minimum wage mandated by that legislation took effect during the last week of July 2009.