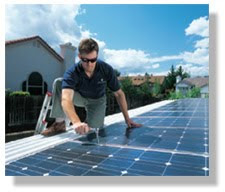 Have you seen your power bill lately? Are you happy with it?

If like many people, you have and you're not, to answer both questions in order, perhaps you might find the appeal of saving the money you currently send to the power utility companies each month by generating your own power directly from the sun to be a pretty compelling idea.

And why not? It's a technology that can provide the energy you want while cutting your bill and is currently believed to be good for the environment (you know environmentalists - sooner or later, they'll find something wrong with it.)

But does it make sense to go solar?

Warren Meyer has been weighing the costs and benefits of going solar at his home in Phoenix, Arizona, perhaps the sunniest major city in the United States. If going solar can be made to work economically anywhere in the U.S., Phoenix would be at the top of the list of places that would benefit. He found that going solar could work, but only if U.S. and Arizona taxpayers chipped in and helped him. A lot:

For this analysis, I will use the prices here. The $72,167 cost for a 11.76 kW system is pretty competitive at $6.13 per watt installed (this is rated watts, not actual — see footnote). The panels themselves can be bought for about $3 per watt, with about $1 a watt for other equipment like inverters and $2 per watt for installation. Do-it-yourself packages for a similar size system are here and go for around $4-$4.50 per watt.

The solar company estimates that this system in Phoenix will save me$2,779 a year on my electric bill. I have not checked their math, but I assume they are not under-estimating this number in their marketing literature. Taking this savings, we get a payback on the installation of about 26 years. This ignores future electricity price increases, but also ignores the time value of money. At 8% over 20 years, it has a net present value of NEGATIVE $41,558. At the end of the day, this is a terrible return — in fact a huge value destruction.

But I began this post saying a solar investment might make sense. How? Well, that is where your willingness to reach into your neighbor’s pocket comes in. Our solar company estimates the following tax breaks and rebates on the system described above:

Like in many other cases, other peoples' money suddenly makes solar a good investment. Now we are looking at $2,779 a year in savings from a net investment of $14,237, or about a five year payback. Over 20 years even assuming no inflation and an 8% cost of money that has an NPV of $12,081.

So — I officially reverse my past conclusions that home solar does not pay. It can in fact be a good investment — for you.

We wondered about that math however. What if utilities increase their rates over time? Wouldn't that make going solar today more beneficial, since the potential savings would grow over time as well?

The most recent trend we can find for Phoenix indicates that the cost to consumers of buying electricity has been rising steadily for years. In a series of general rate increases from 2002 to 2008, Arizona utility SRP increased the rate it charges its customers by 26.7% in three separate increases, which suggests an average compound annualized rate of increase of 4.0%.

If that rate of increase continues, that could be a pretty significant savings for a homeowner going solar. We next went to SRP's web site to find out what kind of deal we might be able to get through them. Here's what we found:

When you install a solar electric system, SRP will help defray your cost with an incentive of $2.70 per watt, up to $13,500 (through April 30, 2010). Here's an example of the costs and incentives associated with the installation of a system:

Sure, it's not the 11.76 kW system that Warren investigated, but let's say this 5.00 kW system offered by the utility company suits our Phoenix homeowner's needs. We'll assume that the utility rate goes up by 4.0% per year, which means the annual benefits provided by the system would steadily increase in value by that amount.

On the other side of that coin however is the effect of depreciation - the fact that any system we might choose to install will decrease in value over time. Here, we'll assume that all the incentives and tax credits for installing the system are enough to offset much of the effects of depreciation that the system will have over its lifetime. Since those subsidies reduce the cost of the system by $20,950, or almost 60% of its original value, we'll assume that the unit depreciates in value at a steady rate of 1.0% per year over its useful life, which we'll assume also incorporates the costs of maintaining the system. So, after 20 years, the unit would be worth 20% of its original value.

We'll note that losing 80% of its value over a 20 year period is equivalent to a straight line depreciation of 4.0% per year. Without the subsidies, the effects of depreciation would completely cancel out the benefits of increased savings of energy costs. For our purposes though, we care about the net rate of appreciation, which we find as the difference between the rate at which the benefits increase each year and our assumed rate of depreciation: 4.0% - 1.0%, or 3.0%.

Finally, there's the issue of the cost of money over time. Here, we'll assume that cost is reflected by the average rate of a home equity loan, such as a homeowner might take out for the purpose of raising the cash needed to cover their costs of installing the system. From Bankrate.com, we found an average 8.228% rate for home equity loans in the Phoenix-Mesa market, which we'll use as our cost of money.

Using our default data, we find that in terms of profitability, our hypothetical homeowner would nearly break even.

We find then that installing the system just barely makes sense for our hypothetical Phoenix homeowner, especially if they can reasonably expect that their power bills might go up at a faster rate over time or if they can get a lower cost of money.

But let's not forget the taxpayers and the utility company! It costs them $20,950 to obtain the same benefits for the homeowner. Replacing the default data for the Cost of Buying and Installing System with figure reveals that they are underwater in this deal to the extent of -1.8%.

As a result, we find that with currently available technology, even in Phoenix, Arizona, the one major city in the U.S. where it would provide the biggest bang for the buck, and even with massive subsidies, going solar for homeowners is overall a losing proposition.

Warren Meyer came to a similar conclusion for his considerations:

For the country, it is a terrible investment. Your neighbors are contributing $57,930 in subsidies while you receive just $12,081 in benefits. The remainder, just over $45,000, is a dead-weight loss to the economy. It is money destroyed by the government.

You're more than welcome to use our tool above to determine if the technology you're considering is worth it for you.

For our part, we played with the numbers and found that a system that can produce $720.00 in annual savings, with a net rate of appreciation of 0.0% (assuming the increase in annual savings and depreciation balance each other out) and at the same cost of money would need to cost just $8,750 to buy and install for the homeowner to break even. Such a system would not create any deadweight loss or produce any distortions into the economy through subsidies, as they would not be needed.

Clearly, politicians seeking to create or enhance such subsidies have other priorities....