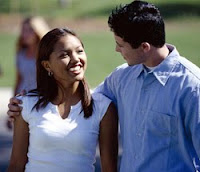 What's the biggest age difference you should have with the person you're dating?

Don't think the answer to that question doesn't matter! The truth is that if the age difference between you and your date is too great, you'll probably end up triggering society's collective gag reflex. It's just not cool to be viewed as either robbing the cradle or the grave.

Thanks to the Money Grubbing Lawyer however, we finally know the formula for defining the boundary between people saying "Cool" or saying "Ewww!": the "Half Plus Seven" rule:

I witnessed a mini-scandal recently when a recently-divorced 34 year old colleague brought his new 23 year old girlfriend to an event. He thought it was fine- they were both adults and she had just graduated from university. Others disagreed, arguing that it was a clear violation of the undisputed rule of inter-age dating, the "Half Plus Seven" rule. Under this clever formula, the youngest permissible age to date is half your own age plus seven, meaning that he couldn't date anyone younger 24. For you Excel geeks out there, the rule is if(partner age<((your age/2)+7), gross, cool).

We're here to save you the trouble of running the Excel spreadsheet calculation. Just enter the indicated data in the tool below and we'll tell you the minimum age of the person you should be dating:

Now that you know, you have no excuses for ever crossing that line! Better yet, as members of society, we won't ever have to say "Ewww!"