You can blame Felix Salmon for this post on our site, since he inspired it by linking to this map of Europe's "alcohol belts", which depicts the predominant forms of alcohol consumed across the geography of Europe. 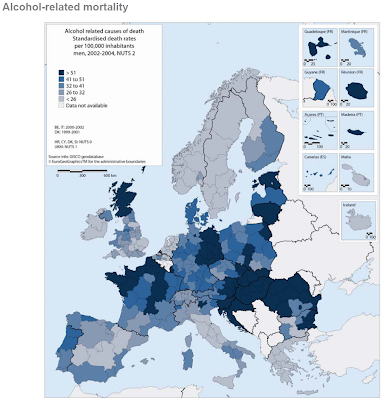 We wondered what other maps there might be related to alcohol consumption in Europe, and we found a really cool one that breaks down the death rates due to alcohol-related mortality by geographic regions within European nations. We found the map in Eurostat's 2009 report on Who Dies of What in Europe Before the Age of 65! This map shows the male death rate per 100,000 broken down by subnational regions within Europe.

One thing led to another, and we started wondering what a similar map would look like for the United States. Unfortunately though, that kind of map doesn't exist. So we decided to create it ourselves. 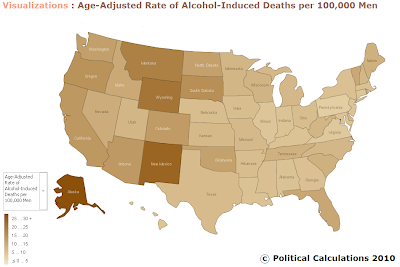 We extracted the original age-adjusted U.S. state alcohol-induced death data from the U.S. Centers for Disease Control's 17 April 2009 report Deaths: Final Data for 2006. We then calculated the approximate state by state data by applying the national percentage of male deaths due to alcohol-induces causes, which we determined from data found in Table 24, to the individual states, the data for which we found in Table 29 of the report.

We've posted all our data on ManyEyes, with direct access to the interactive version of our U.S. map also available on the site.

The U.S. map showing the death rate per 100,000 men for alcohol-induced causes of death for each of the United States does not include fatalities resulting from accidents, homicides, and other causes indirectly related to alcohol use, as well as newborn deaths associated with maternal alcohol use.

Comparing the two maps, we find that Europeans, especially in northern and eastern Europe, have a much higher rate of mortality from alcohol-related medical conditions than Americans. New Mexico, the U.S. state with the highest proportion of alcohol-related deaths per 100,000 men, would fall into the middle of Europe's alcohol-induced death scale. We're also surprised by the high incidence of alcohol-related deaths recorded in northern and central France, which is on par with those seen in the former nations of the Warsaw Pact in eastern Europe.

As for Felix, who deserves the blame for this post, we'll conclude by disrupting his world. Last November, Barry Ritholtz described Rolfe Winkler as being a "thinking man's Felix Salmon." Applying what we know from Peabody's Improbable History, where a "boy and his dog" also implies that there's a "dog and his boy," we wonder just who exactly is Felix Salmon's thinking man?