Right now, the U.S. Congress is working to rapidly advance new legislation that is intended to create new jobs, in part driven by the failure of last year's "stimulus package" to achieve that result. As part of this new effort to actually stimulate job creation, a bipartisan proposal in the U.S. Senate to provide a tax break to employers hiring new employees by eliminating the employer's portion of Social Security payroll taxes is being considered. This proposal would reduce the cost to employers by 6.2% of their new employee's pay.

That might sound like quite a bit, but as we'll show you, it will have a minimal effect upon hiring activity.

Let's start by considering the least expensive employees that can be hired: those earning the federal minimum wage of $7.25 per hour. Let's next look at the employers most likely to hire them: small businesses, or rather, businesses with fewer than 100 employees.

We next used our tool to estimate the total hourly employment cost for employing a new worker at the federal minimum wage for small businesses ranging in size from two to 100 employees. By definition, the first employee of a small business is the boss, so we're looking purely at the cost for an existing business to hire an additional worker.

The following charts show what we found. The first chart shows the total hourly cost, including typical overhead expenses, of employing a new worker for small businesses ranging in size from two to 100 employees: 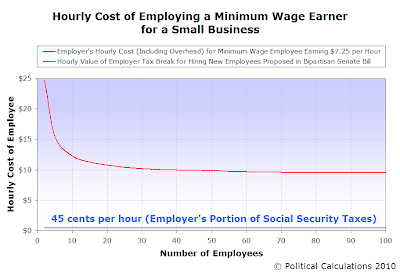 Our second chart reveals how much additional business revenue that employee has to generate annually to justify their hiring by the small businesses: 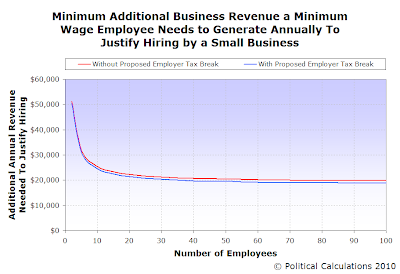 What we see is that the proposed tax break will do little to justify the hiring of an additional employee at the federal minimum wage. In looking at the difference between the annual revenue amounts that must be generated by the minimum wager earner to justify their hiring, the employer's annual tax break of $936 represents just a drop in the bucket. Even for the largest of small businesses, which would see the greatest benefit from the proposal given their lower overhead costs per employee, the minimum wage earner must generate at least $18,907 annually to justify their hiring with the proposed tax break. And we also confirm that the smaller the business, the higher the amount of revenue that must be generated.

That's significant because the smallest businesses are the biggest employers in the United States. The following two charts, which we found in Register.com's Web Business Monthly newsletter, show just how big U.S. small businesses are:

For what it's worth, the federal government could avoid incurring the higher deficits that such proposals would entail and deliver the same marginal benefits for employers by simply reducing the federal minimum wage from $7.25 per hour to $6.85 per hour. Or perhaps if we went by President Barack Obama's tax credit proposal of $5,000 per newly-hired employee, achieving the same benefit as that proposal might be realized by reducing the minimum wage further to $4.85 per hour.

Politicians sure have a funny way of admitting they jacked up the federal minimum wage by way too much. It's just a shame they can't come out and say so without also jacking up the national debt!