Mark Perry has taken a closer look at the most recent series of federal minimum wage hikes and their apparent effect upon teen unemployment levels. Here is the bottom line from his analysis:

Economic theory and empirical evidence suggest that the overall effect of a minimum wage increase is always negative, on net, and can never be positive, on net. So the only real disagreement is how negative the effect will be, not whether it's negative on balance.

But since there are those who would dispute that finding, we thought it might be interesting to go back to January 1948, the earliest month for which the Bureau of Labor Statistics provides data on the employment status of teens, to find out how all the federal minimum wage hikes that have taken place since then have affected teens. We like to look at the effect of the minimum wage upon teens because teens have historically accounted for one-quarter of all those who earn the federal minimum wage in the United States, making it easier to determine its impact.

Our preferred method of measuring the impact of federal minimum wage hikes upon teens is to consider their percentage representation within the entire U.S. work force, since this approach allows us to account for demographic changes over time as well as overall economic conditions.

Here, what we'll specifically consider is the year-over-year change in the teen percentage share of total employment following when an increase in the federal minimum wage takes effect. If Mark Perry's bottom line contention holds, we should find that the percentage representation of teens within the entire U.S. population of employed individuals will predominantly be either flat or lower one year after a federal minimum wage increase takes place.

Meanwhile, if those who might dispute that contention are correct, we would expect to see either an equal balance between a rising and falling teen percentage share of total U.S. employment or perhaps even a predominantly flat or rising share of teens within the U.S. workforce in the year following a federal minimum wage increase. 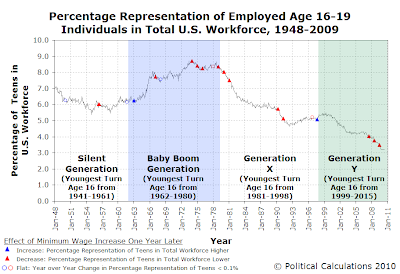 In our chart showing the percentage representation of employed teens in the total U.S. workforce from January 1948 through February 2010, we find that of the 20 federal minimum wage hikes that have taken place during this period, the percentage representation of teens within the U.S. civilian labor force either was flat or lower one year later on 18 of those occasions.

We find there may be a simple demographic explanation that accounts for both apparent exceptions. Both of these percentage share increases occurred shortly after the number of teens within the U.S. population sharply increased. For the minimum wage increase of September 1963, the percentage share increase of teens in the U.S. work force corresponds to the period when the earliest-born members of the post World War II Baby Boom generation reached the age of 16.

Meanwhile, we find a similar dynamic for when the earliest-born members of Generation Y reached the age of 16, which coincides with the only other increase we observe in the percentage share of teens in the U.S workforce following an increase in the federal minimum wage from 1948 through the present.

On balance, these observations would seem to confirm Mark Perry's contention that the effect of a minimum wage increase is either neutral at best and most often negative. We'll conclude by noting that even the two apparent exceptions we observe between January 1948 and February 2010 may also hold to this pattern, given that the percentage share of teens within the U.S. workforce may have increased by even more than what was observed, if not for the likely negative effects of the federal minimum wage upon the teenage portion of the U.S. workforce.