Political Calculations
Unexpectedly Intriguing!
05 May 2010
Whither Dividends in 2010 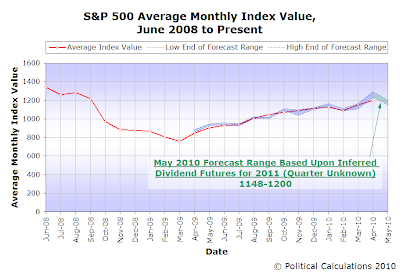 Yesterday, we predicted the stock market would decline in May 2010, with the average of stock prices for the S&P 500 during the month likely to fall into the range between 1148 and 1200. Today, we're going to consider just what's lurking ahead for investors.

We'll start by taking a look at where the S&P 500's dividends are headed. In studying the stock market's history, we've found that the market's dividends per share provide a pretty good indication of the relative health of the U.S. economy, or at least, its private sector.

As a general rule of thumb, the economy might be considered to be healthy if the stock market's dividends per share are growing with time. However, if that dividend growth stalls out or reverses, that condition frequently coincides with periods of economic distress.

That's quite a lot of divergence, especially with Standard & Poor's indicated dividend rate for 2010, which corresponds to the rate indicated for December 2010. But then, S&P index wizard Howard Silverblatt offers an explanation in S&P's offers an explanation in spreadsheet documenting Indicated Dividend Changes that perhaps accounts for why his forecast is so high compared to those seen by the S&P 500 index' dividend futures:

Left unchanged by Congress, qualified dividends will be taxed at 38.5% starting in 2011, compared to the current 15% rate

If past tax changes are any indications, companies could change their Q4 payments to qualify for the lower rate - it's not what you make, but what you keep

The Wall Street Journal carried an article on 29 April 2010 looking specifically at how taxes on dividends will change in 2011, as the current majority party in the U.S. Congress plans to hike these taxes on 1 January 2011, seeking to increase the federal government's total collections from taxes on stock market dividends paid to individuals by up to 164% compared with today's level of taxation.

One could certainly make an argument that the top income-earning taxpayers for whom the new, top tax rates on dividend-based income would apply could choose to lower the dividend payments they receive to avoid the higher rates of taxation once they go into effect in 2011. If you consider that many of these high dividend earning individuals participate in the board decisions that set the amount of dividends that publicly-traded companies pay out to their shareholders, they certainly have the means to do so.

With approximately 45% (or 52.5 million) American households, having money invested in the stock market through their retirement plans or other investments, if we assume 2.59 persons per household, that would mean that some 136 million Americans can expect to be affected by the new law to some degree.

And that doesn't fully include all the public sector employees whose pension funds are heavily invested in the market as well. If you thought those public pension plans were massively underfunded now, just wait a year....

Finally, with lower rates of dividend growth to support rising stock prices, we would anticipate that stock prices would suffer as well, resulting in all investors realizing lower returns on their investments. That, in turn, would affect the ability of publicly-traded companies to attract new capital through issuing new shares in the stock market, since many investors would not be able to realize enough of a return on their investments to justify making them.

Which would then mean the companies would be less able to grow their businesses, which in turn means less economic growth in the U.S. economy.

But perhaps there are larger forces at work that might also be contributing to the likelihood of lower economic growth in 2011. That's something we'll explore tomorrow....