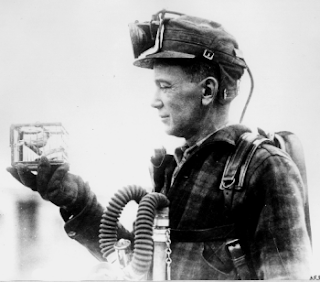 We follow the teen jobs scene for one major reason: teens are the most marginal of workers in the U.S. economy. By that, we mean that compared to all older workers, teens are the least educated, least skilled and the most inexperienced members of the U.S. workforce. And unlike older workers, teens can easily disappear from the U.S. workforce, as they often have the option of being full time students while living in their parents' home if their employment prospects aren't good.

Being the most marginal members of the U.S. workforce then, teens are the first in line to be affected by any good or bad developments in the U.S. job market. So much so that what happens in the job market for teens can be taken as a leading indicator for what will happen about a year later in the U.S. economy.

Which brings us to the Bureau of Labor Statistics' June 2010 Employment Situation report, which suggests that things will be taking a rather dramatic turn for the worst in the latter half of 2011. The charts below show what we found when we dug into the report to uncover the teen job situation. 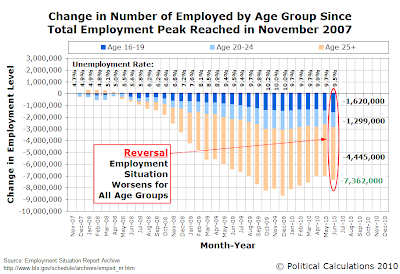 Our first chart looks at change in the number of employed by age group since November 2007, when total employment peaked just before the U.S. economy entered into recession in December 2007. June 2010 marked a reversal for all age groups in the improvements observed since December 2008.

That in itself isn't a big deal, as we do expect some volatility in the jobs numbers from month to month. And we expected to see job losses since the U.S. Census has begun laying off the temporary workers it hired back in April and May to support its once-every-ten-years count of the American people. And we've already observed that most of the workers hired by the Census most likely fall into the Age 20-24 bracket, the only demographic group to see a dramatic surge in their representation in the U.S. workforce in the May 2010 Employment Situation report, when Census hiring activity boosted the job market. 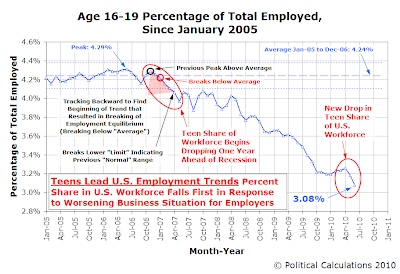 What rattled our canary's cage however was revealed when we looked at the trend in the percentage representation of teens in the U.S. workforce. As of June 2010, teens have fallen to a percentage share of 3.08% of the total U.S. workforce, a dramatic reversal from the stabilization and uptrend we've observed that had been established in October 2009. 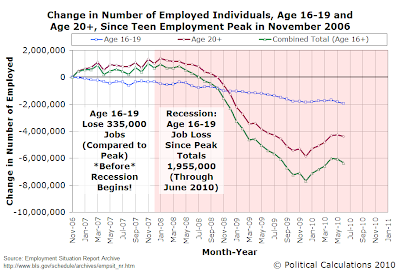 Extending back to January 2005, this chart also shows what we've observed of the role of teens as the proverbial canary in the coal mine. We see that teen employment peaked and began falling roughly one year before the U.S. economy entered into recession, in the period from November 2006 through December 2007. As we've previously found, that event directly coincided with a significant worsening in the future business outlook for the employers of teens.

What we see with the June 2010 jobs data is that the teen share of the U.S. workforce has plunged to a new low, which we suspect coincides with the expectation of a new worsening in the future business outlook for the U.S. economy. 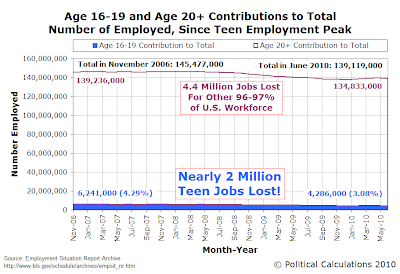 Our final chart shows how the number of teens and older workers has changed since teen employment peaked in November 2006.

With nearly two million jobs lost in less than four years, the new trend in teen jobs indicates that whatever recovery might have been taking place since October 2009 is losing steam and that the situation can be expected to become worse. How much worse remains to be seen, but for now, after clocking in with a seemingly healthy economic growth rate for the just finished second quarter of 2010, we think both U.S. GDP and the U.S. job market will trend lower well into 2011.