On 15 July 2010, Goldman Sachs (NYSE: GS) entered into a settlement with the U.S. Securities and Exchange Commission, in which the company agreed to pay the largest fine ever levied against a publicly traded firm in U.S. history. Barry Ritholtz has been arguing that Goldman suffered a "massive" defeat, both to the firm's bottom line from the over half-billion dollar penalty it must pay and to its market capitalization.

FT's Alphaville says I am cranky. Jeff Matthews says I am wrong. Michelle Leder points out the settlement is a pittance relative to GS’ cash.

Here’s a news flash: All of that is irrelevant. We are a nation of laws, and that is what guides SEC prosecutions, negotiations, and settlements. Sure, I may be cranky (only fellow curmudgeon Alan Abelson agrees with me), but what I truly am is astonished at some of the uninformed commentary pinging about inter-tubes about this subject.

Spin isn’t fact, opinions aren’t laws, and having an opinion is not the same as being informed.

Barry then runs through the legal issues ("It's the Law, Bitches!") making very solid arguments, but where he runs into a bit of trouble is when he looks at the stock market's reaction to news of the settlement:

6) Goldman’s Stock Rallied, therefore, its a victory:  I’ve always hated that analysis, but since you brought it up: Pre-indictment, GS was north of $180. It closed Friday at $146. Its still some 20% below where it was.

On a related noted, since the indictment, Goldman Sachs has lost about $15 Billion if market capitalization. Isn’t that part a consequence of the SEC indictment? Isn’t that, in effect, part of the penalty?

It would indeed be, however determining the answer to the question isn't as clear cut as simply comparing Goldman Sachs' stock price and market capitalization on the day before the SEC's action against the company was first announced on 16 April 2010 with the day before the announcement of the settlement on 16 July 2010.

The problem with this comparison is that the stock market didn't stay level during this time frame. It fell by roughly 12%, as measured by the S&P 500.

So the question then is how much of the decline in Goldman Sachs' stock price and market cap observed over this period is tied to the overall decline in stock prices, and how much is tied to its legal troubles?

We have an imperfect way to find out. What we can do is compare the relative performance of GS stock with that for its closest competitors in the United States, JPMorgan Chase (NYSE: JPM) and Morgan Stanley (NYSE: MS).

The idea here is that Goldman's U.S. based competition is subject to most of the same economic, business and regulatory conditions as is Goldman Sachs, so the relative performance of their stocks over the period of Goldman Sachs' legal cloud will allow us to isolate a large portion of the effect of those conditions on GS' stock price. What makes this method imperfect is that the stocks of these companies will also react to news that specifically affects each, adding a noisy element to an otherwise direct comparison. 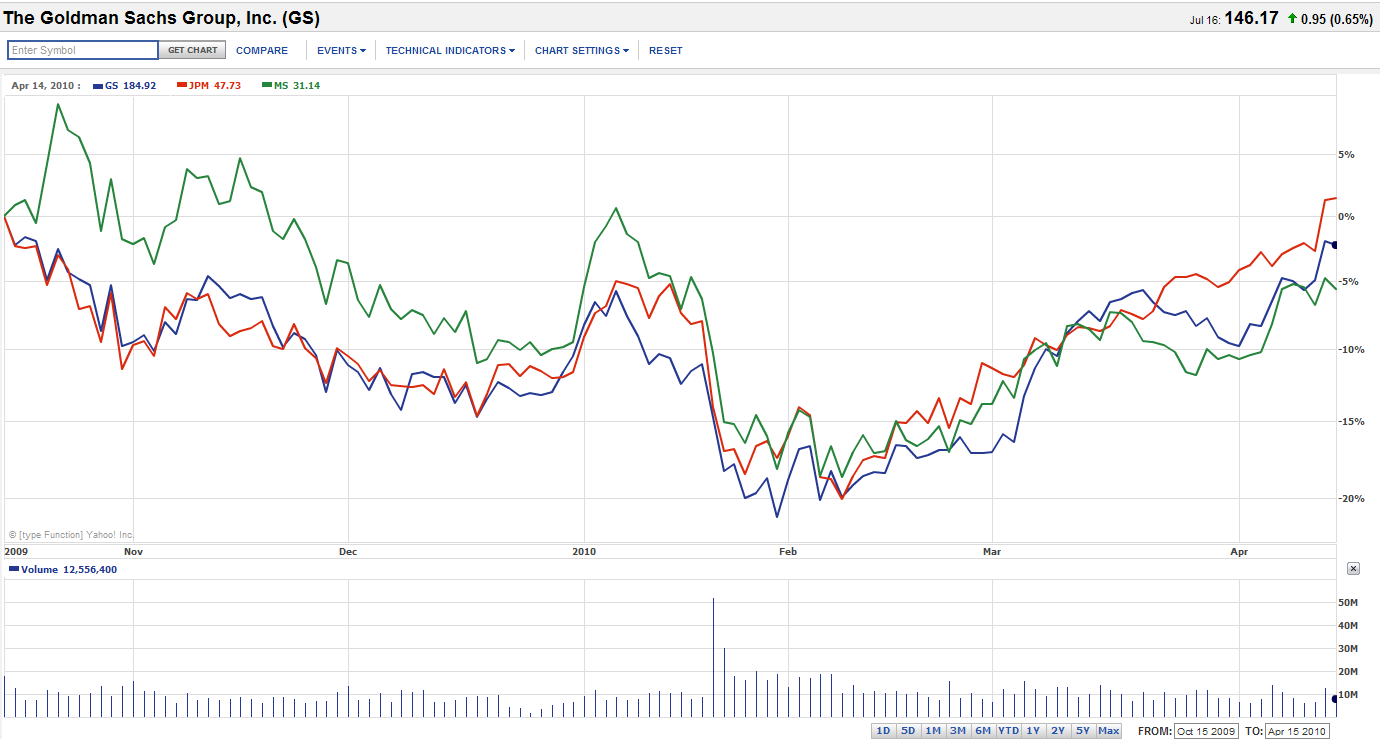 Our next chart shows the relative performance of each stock from 15 April 2010, the day before the SEC announcement of its indictment against Goldman, through 16 July 2010, which captures the stock market's initial reaction to the news of Goldman's settlement: 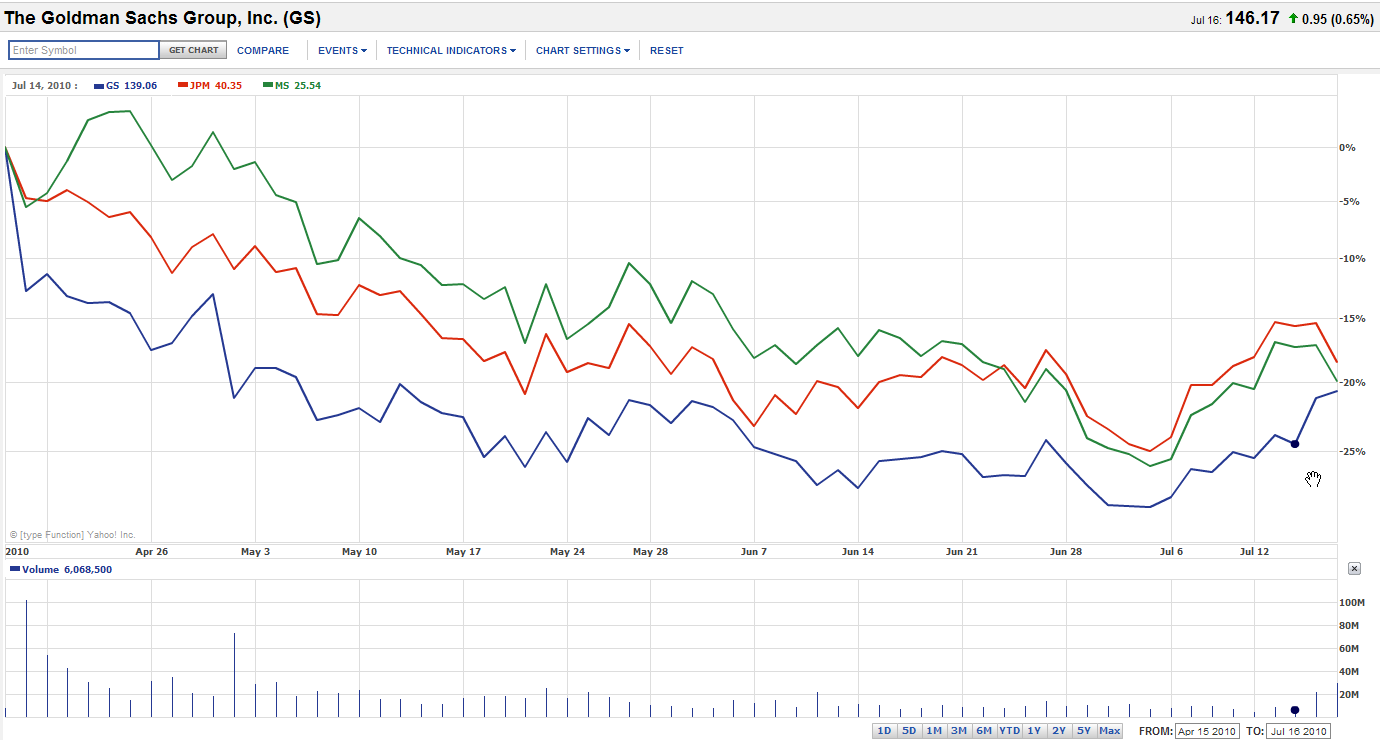 The period in which the news of the indictment affected Goldman Sachs' stock price is 16 April 2010, the day of the indictment, through 14 July 2010, the day before the news of GS' settlement with the SEC. During this period, we observe that Goldman Sachs' stock performed in a range from 2% to 10% below the relative performance of JPMorgan Chase' stock, underperforming with respect to the previous six month period by an average of 5-6% of the value of its closing stock price of $184.16 on 15 April 2010.

So we conclude that Barry Ritholtz is right. We'll conclude by noting that the extra loss of market capitalization would have negatively affected anyone selling their shares of Goldman Sachs' stock during this period who had purchased their shares before the SEC indictment occurred.

There's likely quite a lot of civil actions that might result from Goldman's SEC troubles as a result, so we would anticipate that Goldman Sachs' legal troubles related to the SEC indictment aren't quite over yet.