How heavily will President Obama's planned tax hikes weigh upon the U.S. economy?

Going by Table S-1 from his administration's Fiscal Year 2010 and 2011 budget proposals, either the economy is going to start growing like gangbusters next year, or the future tax burden is going to come down pretty heavily, like a boot on the neck of an oil company: 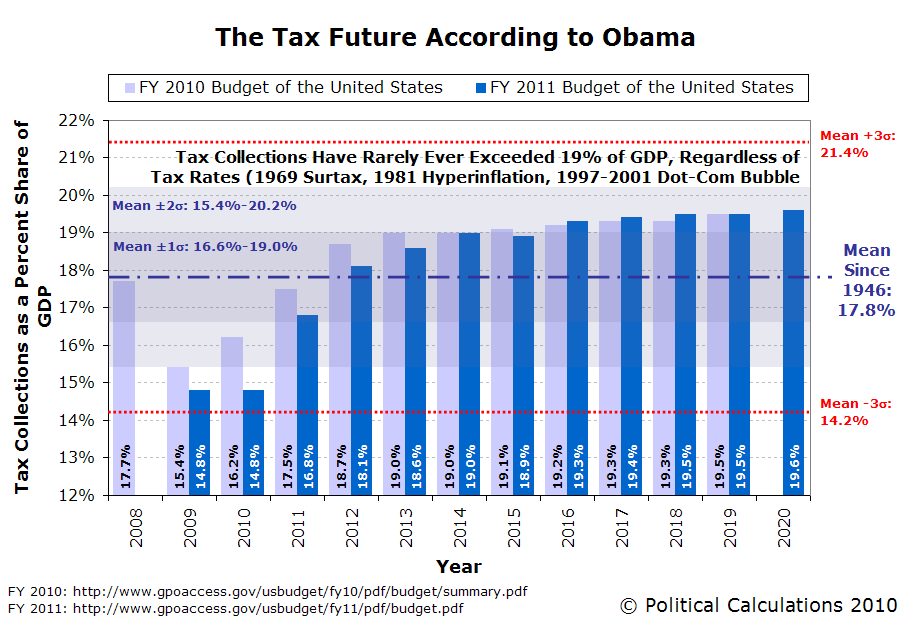 Looking back over history, since World War II, the federal government's total tax collections have only exceeded 19.0% of GDP in eight of those 65 years, each of which represented unique conditions in the U.S. economy: the 1969 surprise 10% surtax on high income earners, the hyperinflation of 1981, and the Dot-Com Bubble of 1997-2001. And that's regardless of how individual, corporate and payroll tax rates have been set through all those years!

It's just a shame they won't ever be enough to cover the deficits he'll be leaving behind!

But then, check out the gap between what President Obama's top budget officials forecast in 2009 versus what actually happened in that year. Or for that matter, what they expect to happen this year versus what they originally anticipated, when they might actually have thought that $787 billion stimulus package might actually work. It's not like his team is particularly gifted where any kind of economic forecasting might be concerned....