Political Calculations
Unexpectedly Intriguing!
September 27, 2010
Back to Basics for the S&P 500

Two things have happened since we last offered up our monthly look ahead at where stock prices are going next:

Both are very big deals, since the first item allows us to anticipate where stock prices are going next using our direct methods, while the second item confirms that the stock market is finally leaving its summer noise-driven doldrums behind. 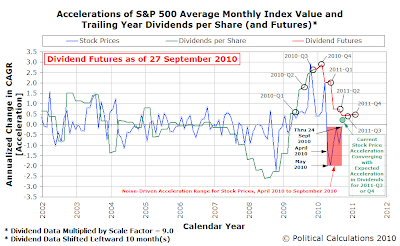 The latest update for our stock price and trailing year dividends acceleration chart shows both factors at work. At present, the average of stock prices for the month of September 2010 has risen just above the range of noise we've observed from April into September.

Through Friday, 24 September 2010, the acceleration of stock prices in the S&P 500 would appear to be converging toward the change in the rate of growth of the index' trailing year dividends per share for either the third or fourth quarter of 2011. We've indicated approximately where the the acceleration of stock prices would be given their closing value from last Friday's trading with the green circle.

Given that there's almost no difference between the acceleration levels expected for S&P 500 dividends for these two distant quarters, it really doesn't matter which one investors have focused upon in setting their future expectations at this time. If we had to pick one, we would choose 2011-Q4 as being the current focal point in time for forward-looking investors.

Doing the math to identify what stock prices correspond to that level of expected dividends with more typical levels of noise in the market would place stock prices in a range from 1150 to 1170. This range of values for the S&P 500 will apply in the very near term.

Prior to 9 September 2011, we had been limited by the dividend futures data only extending through the second quarter of 2011. The absence of data covering the third and fourth quarters of 2011, combined with the noise-driven deviation we observed in stock prices since April, led us to invent the indirect method we've been using over the last several months to anticipate how stock prices would change.

For our part, we couldn't be happier things would appear to be in the process of becoming less noisy! Although we demonstrated that we could largely track where stock prices would go next during this extended episode of noise-driven market activity, the indirect method we developed to deal with the situation was, as we would expect, more prone to larger errors than our direct method.

We'll be following up our observations of dividend futures and what they mean for stock prices during the first full week of October.

We'll also be updating our quarterly prediction track record in the latter half of October. Will we keep or improve our plus-minus score of +23? Or will our disastrous prediction that stock prices would fall in September 2010 cause our overall prediction accuracy rating to sink below the 65.3% mark we had recorded last July?

Update 4 October 2010: Taking a closer look at the expected future dividend data, it's occurred to us that much of the noise we've seen since April 2010 may in fact be the result of investors "pricing in" higher taxes on dividends.

It could well be that the acceleration level where prices have been since April 2010 were perhaps marking what the real expectations for 2011 are, while the level of acceleration for trailing year dividends for 2011 are perhaps being inflated by an unusually high payout in the first quarter of 2011 as investors seek to "beat the clock." In a weird sense, the noise in the market is perhaps in the dividend data rather than in the price data!

We'll be following this up soon!