Now that the eruption of noise that drove down stock prices in the period from April 2010 into September 2010 appears to have dissipated, where do stock prices stand with respect to their underlying dividends per share today? 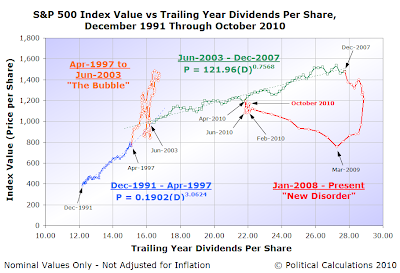 Would you believe it if we said "almost right back where they were in April 2010"? Back before the noise event in the market occurred?

Or better still, just shy of where they were when dividends per share were at the same level they are today back in November and December of 2005? (Is there anyone who still thinks that the general movement of stock prices over time are totally random?)

But still, none of that answers a bigger problem we've been trying to solve over the past several months. In previous noise-driven events, we've been able to identify the proximate source of the noise affecting stock prices. Our best case in point is the noise event of late January 2010, when stock prices dove in response to a sudden increase in uncertainty related to Federal Reserve Chairman Ben Bernanke's re-nomination process.

Like most noise-driven events, once the noise dissipated, stock prices went back to behaving as we would expect and also to levels that we would expect.

Taking that example into account, we think we might finally have identified the source of the April-September 2010 noise event: the end of the Federal Reserve's initial quantitative easing program back in March-April 2010.

After that point in time, the change in the rate of growth of stock prices dropped far below where the changes in their underlying growth rate of dividends per share would place them.

And then, in September 2010, it became very likely again that the Federal Reserve would implement a new round of quantitative easing, commonly called "QE2" or "QE 2.0". Fed Chairman Ben Bernanke later confirmed the Fed's policy outlook on 16 October 2010, with the description of the size and scope of the new round of quantitative easing coinciding with the end of the FOMC's 2-3 November 2010 meeting.

We strongly suspect the noise in the stock market from April 2010 to September 2010 is directly related to the uncertainty investors had for the U.S. inflation rate. In fact, in many ways, the period from April through September 2010 displays a number of deflationary characteristics, which is the primary reason the Fed is initiating QE 2.0.

Without that new round of quantitative easing, it's very likely that investor perceptions of the risk of deflation would lead stock prices to underperform, much as they did during the period from April 2010 into September 2010. 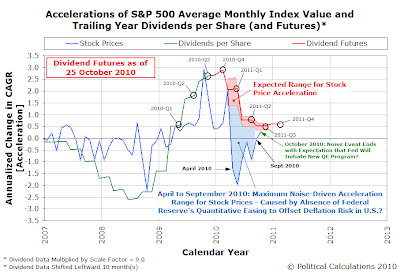 The magnitude of that deflation risk upon the stock market is potentially revealed by our chart showing the change in the growth rates of both stock prices with projected trailing year dividends per share data.

That this period consisted of very low rates of inflation or outright deflation is confirmed by the data in the table above provided by InflationData.

We'll close by noting that the timing of the Fed's ending and restarting of its quantitative easing program with the gap we've observed is perhaps coincidental. However, we cannot as yet identify any other forces or events that would be capable of disrupting the close coupling that we've observed exists between the accelerations of dividends per share and stock share prices that may also have been at play to the degree that they were during this period of time.