On 10 November 2010, Erskine Bowles and Alan Simpson, the co-chairs of President Obama's blue-ribbon deficit reduction commission (whose work we've commented upon recently), released a document with their suggestions for getting the U.S. federal government's annual budget deficits back under control. We were especially intrigued by one of their proposals to completely revamp the entire U.S. income tax system, in which they would eliminate all deductions and tax credits while setting just three tax brackets for all income-earning Americans: 8%, 14% and 23%. 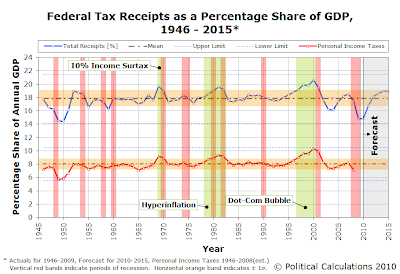 In doing that, they set a basic floor beneath these individual income tax rates, for which these tax rates would need to rise in order to still collect a particular amount of taxes while providing deductions and tax credits for politically-favored individuals. Such as families with children through the Child Tax Credit, poor, working Americans through the Earned Income Tax Credit or homeowners through the Mortgage Interest Tax deduction, to name three very popular deductions and tax credits in the current tax code.

But can that work? How much money would the federal government collect under such a scheme? And what would an individual's income taxes look like if such a plan actually became law?

To find out, we've adapted Political Calculations' Build Your Own Income Tax tool to accommodate the Bowles-Simpson zero plan tax proposal. To provide a frame of reference, we applied the distribution of income in the United States we previously modeled for 2006, since this distribution of income resulted in the federal government collecting nearly eight percent of annual GDP through personal income taxes in that year. This figure is significant in that it represents the long-term average amount of money collected by the federal government through personal income taxes since 1946, regardless of how individual income tax rates have been set through all that time. 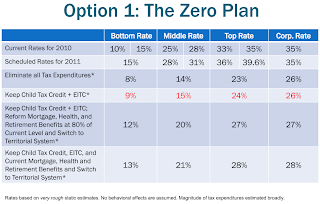 And then we ran into a problem. While the Bowles-Simpson zero plan tax proposal lists the tax rates they believe should apply, they didn't specify at what income levels they would apply.

So we had to do some intelligent guesswork to identify the income thresholds for which the zero plan rates would be effective. Here, we looked at the level at which the current 28% tax rate clicks into effect, in terms of 2006 U.S. dollars. We found this level to be $30,650, so we set the top end of our lowest income tax bracket to be equal to that value.

We next set the low end of the topmost income bracket to be equal to ten times that value, or $306,500. We then cut that value in half to correspond with the point at which the middle tax rate would be effective.

To see our results, just click the "Calculate" button below with the default data shown. You're welcome to play with the numbers as you see fit to test drive other proposals or to create your own individual income tax plan. We'll run the numbers and compare them with the actual values recorded in 2006, and we'll also work out what your individual tax bill would look like under the proposed federal income tax scheme:

Looking at the national level results above, we find we just about nailed it. That result then gives us a frame of reference for determining upon whom the income tax burden will shift when actual numbers are developed for the plan. For instance, if a particular income tax threshold is set lower than what we've entered, that would indicate that a relatively higher burden will be placed upon those with incomes above that level. If our income tax thresholds are set higher, then a relatively lower burden will apply for the individuals with incomes above that level.

On a side note, we can't help but notice how closely the low income threshold we selected is to the median individual income for all individuals in 2006 of $30,353. Which perhaps should not be surprising to us since we've already determined that median household income is exceptionally well correlated with the federal government's total tax collections (or for that matter, personal income tax collections). So much so that we used 2006's median household income figure in the tool as the default value upon which to base our tool's individual income tax calculations, the results of which we've presented below: