Political Calculations
Unexpectedly Intriguing!
08 February 2011
How Much Is That in Gold?

Gold. Nothing glitters quite like it and, as we often hear on the advertisements that air on cable news channels, it's never been worth zero! 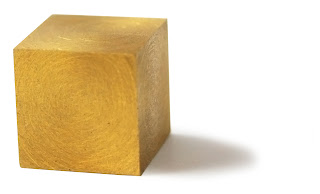 So what if we were to make the U.S. federal government pay every dollar it spends in gold rather than greenbacks?

No, we're not calling for a return to the gold standard, nor are we suggesting that you should go out and buy gold, which may not be as good an investment as the commercials claim. Instead, we think it might make for a neat way to better visualize just how much money the U.S. federal government spends on the things it does by finding out just how big a solid cube of gold of equivalent value would be.

Here's an example that we looked at recently. The federal government subsidizes U.S. fuel ethanol producers using a tax credit of 45 cents for every gallon they distill. In 2011, the U.S. Environmental Protection Agency has mandated that 12 billion gallons of fuel ethanol will be added to motor gasoline, so that means these producers can collectively expect to receive 5.4 billion dollars for all the ethanol they will supply.

But what if the federal government just dipped into Fort Knox and delivered the equivalent value in gold? Exactly how much gold would that be?

We built a tool to find out. Using the information, we find that this $5.4 billion transfer from U.S. taxpayers to U.S. ethanol producers is nearly the equivalent of a 6 foot long by a 6 foot wide by a 6 foot tall solid cube of pure gold weighing over 14 thousand pounds, at least if we go by the spot price for gold as we write this (click here for a more current spot price.)

In the meantime though, we're pretty sure that U.S. ethanol producers are pretty happy with the nearly 6' x 6' x 6' cube of gold they'll be getting in equivalent tax credits from the federal government this year. If they're looking for a place to keep it, we'd suggest the ShelterLogic 6x6x6.5 E Series Shed (Gray) from Amazon, which they might consider placing in their back yard. Perhaps by the pool.

After all, that's over 7 tons of gold. It's not like its going to walk away very easily....