How much will real GDP for the last quarter of 2010 be after the U.S. Bureau of Economic Analysis finishes beating the still incoming raw data for the quarter into submission at the end of March 2011? 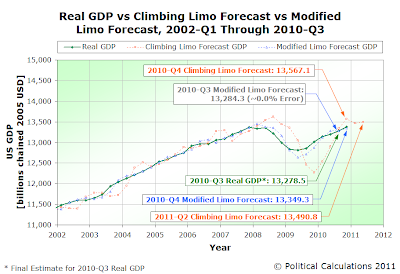 The advance release data for the fourth quarter of 2010 figure of $13,382.6 billion suggests that real GDP might well skew to the high side of our forecast range.

For the third quarter of 2010, our modified limo approach for forecasting GDP was about as dead on target as we can ever hope to get. We had forecast that real GDP in 2010-Q3 would be $13,284.3 billion constant 2005 U.S. dollars. The BEA finalized real GDP for that quarter at $13,278.5 billion, which means we were just ever so slightly off a perfect bullseye by -0.04%.