Two years ago, Political Calculations began offering a month-ahead look at where U.S. stock prices would go next. As we close our two-year long public experiment in forecasting stock prices today, we find that a new noise event began impacting the market in March, with stock prices now approximately 10% below where they would otherwise be. 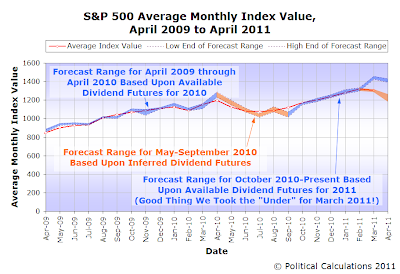 In the absence of that noise, the average of U.S. stock prices as measured by the value of the S&P 500 index would be rising to a range between 1393 and 1429, going by the available dividend futures through 1 April 2011, with investors focusing on the fourth quarter of 2011 in setting their expectations. Projecting the future for stock prices beyond April 2011 using our primary forecasting methods would have stock prices stalling out at that level well into the summer.

The important thing to recognize with the market in its current state is that all noise events have expiration dates. The largest noise-driven event we've seen during the last two years itself ran several months, from April 2010 into September 2010, directly coinciding with the reemergence of deflation risk in the United States in the period between the Federal Reserve's first round of quantitative easing (QE 1.0) and its second round (QE 2.0). 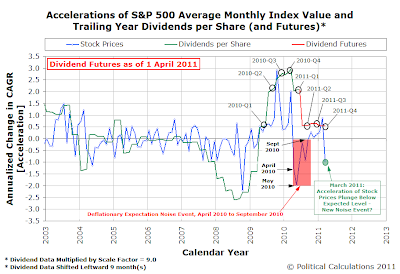 The alternate forecasting method we developed to anticipate stock prices during the QE lag period would instead place stock prices in April 2011 into a range between 1171 and 1264, which would be consistent with the large amount of noise present in the U.S. stock market in March 2011.

In our view, neither of these outcomes is likely. What we believe is likely is that stock prices will track upward from the average level of 1304 they recorded in March 2011 toward the 1393-1429 level our primary method would forecast as the noise currently in the market subsides. The only question is what is behind the noise in the market, which might provide an indication of when it might subside to more typical levels.

Surveying the news, here are a few of the most likely contenders that might be behind the current noise event currently suppressing stock prices in the stock market: