At least, it is if you go by our "modified limo" approach to forecasting future GDP!

Here, we took a forecasting approach originally developed by Steve Conover, which he called the "climbing limo" method, and adapted it to produce a more accurate projection of GDP in the near term (the next quarter) than what the climbing limo method delivers (although to be fair, the climbing limo method was developed to look three quarters into the future - there's a lot that can happen in the meantime to sway the economy off the course that method would forecast!)

Now that the GDP data for the second quarter of 2011 has been finalized, we can now project where real GDP will be in 2011-Q3, using the tool we developed to forecast the next quarter's GDP!

The graph below visualizes the forecast presented by our tool: 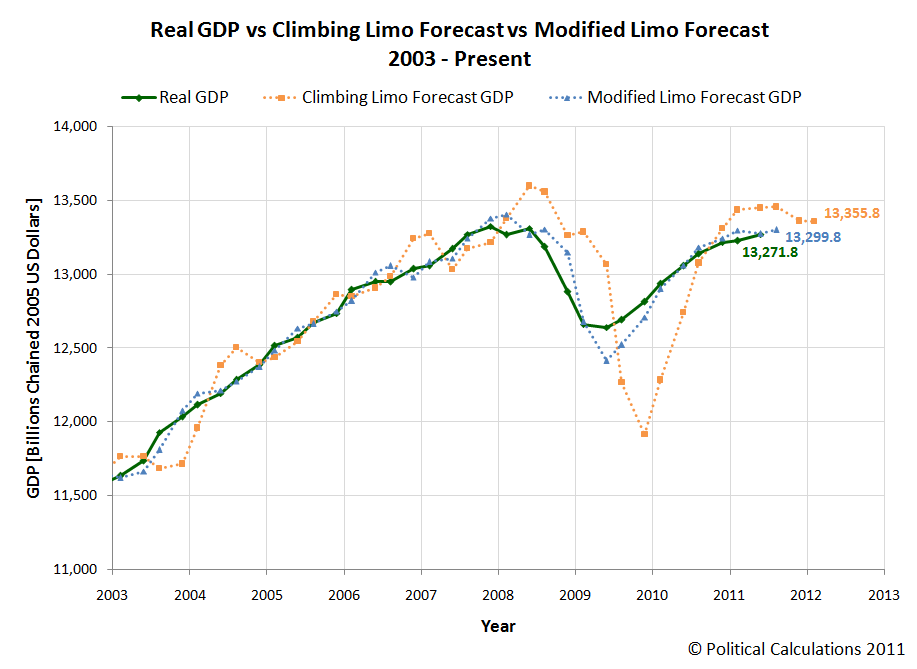 In reality, the target value of $13,299.8 billion in constant 2005 U.S. dollars that we've projected for the inflation-adjusted value of GDP in the third quarter of 2011 represents the midpoint of the forecast range into which we expect GDP to be in 2011-Q3.

The midpoint value of our forecast range for the third quarter of 2011 would represent a 0.8% annualized rate of growth for the U.S. economy. We would describe that level of growth as near-recessionary, if not recessionary. Or as we might better describe it, given the data we have today, the odds are that U.S. will continue to experience what might best be described as a microrecession. But then, such is the nature of inertia.