The U.S. Bureau of Economic Analysis has revised its initial estimate of GDP in the third quarter of GDP downward. We've adjusted our GDP forecast for the fourth quarter of 2011 accordingly. 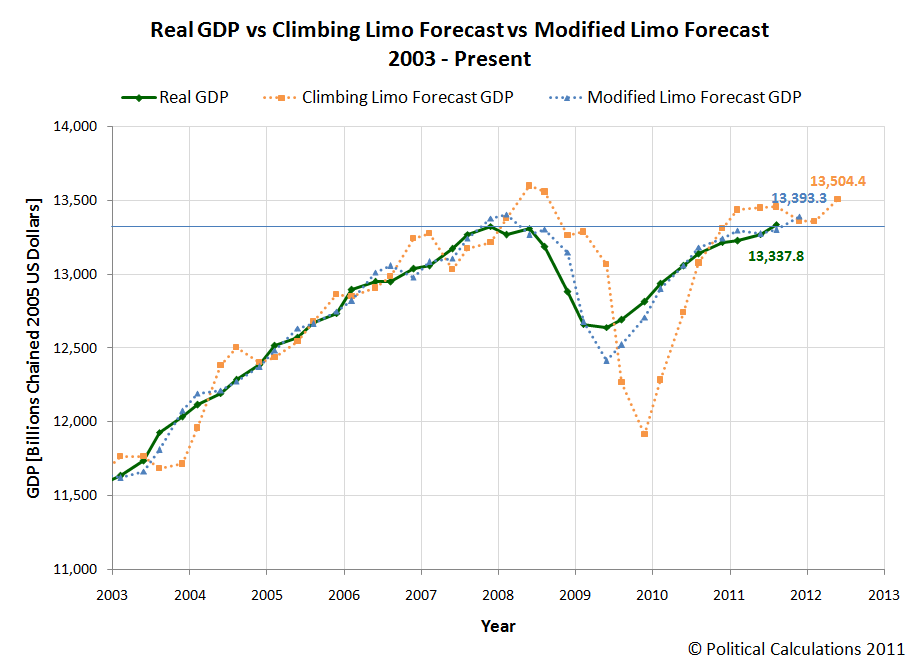 Looking at where U.S. GDP for the third quarter of 2011 has now been adjusted, we note that the midpoint of our forecast range for this quarter is now within 0.28% of where the BEA has revised its GDP estimate.

There will be one more scheduled revision of GDP data for this quarter. We will update our forecast for 2011-Q4 GDP accordingly when this third estimate is released.

Looking backward, our GDP temperature gauges show how the United States' economy has performed over the past three to four quarters with respect to its historical performance since 1980.

In these charts, the temperature spectrum runs from the "cold" purple range, indicating recessionary conditions, through the "cool" blue range, the "comfortable" green range, which indicates solid economic growth, and on through the more "heated" yellow range on up to the "overheated" red range, which are self-explanatory.

Here, the Two-Quarter GDP Temperature Gauge, which covers the two-quarter long intervals of 2010-Q3 through 2011-Q1 (two periods ago), 2010-Q4 through 2011-Q2 (one period ago) and 2011-Q1 through 2011-Q3 (the most recent period) reveals that the U.S. economy over the past year has ranged from recessionary levels, as indicated by the very "cold" purple color to near-recessionary levels, as indicated by the "cool" blue color, which are characterized by lackluster economic growth.

Since the U.S. economy's performance is largely driven by inertia, we anticipate that this lackluster performance will continue well into 2012.